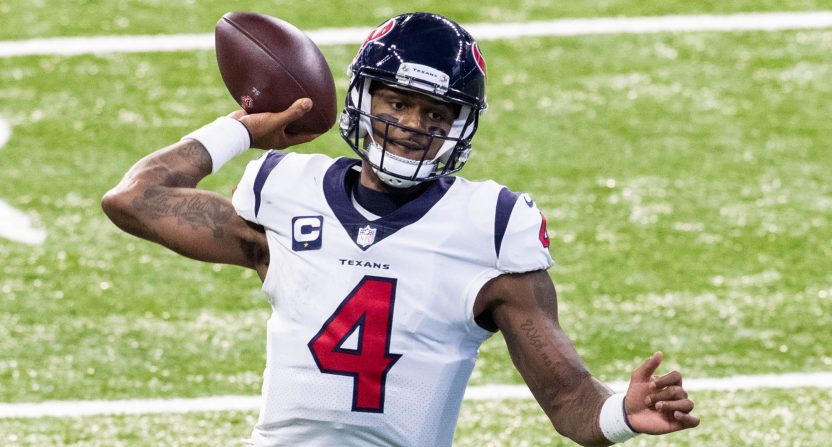 The quarterback carousel is expected to swing swiftly and violently this NFL offseason. With that in mind, let’s rank the 22 most notable signal-callers who will or could become available in the coming weeks and months.

21. Nick Foles: Foles has made a semi-legendary career out of a few well-timed but short-lived hot streaks. For 99 percent of his career, he’s looked and played like a backup. That’s his role moving forward.

19. Drew Lock: The 2019 second-round pick’s arm may have been manufactured by Lockheed Martin, but he’s extremely unpolished and consistent accuracy may be a bridge too far.

18. Mitchell Trubisky: The bust from atop the 2017 draft scored some points and redeemed himself to a small extent with a nice run late in his fourth season, but he’s been so ineffective overall that a starting role is likely far out of reach right now.

17. Ryan Fitzpatrick: Let’s not pretend the lows outweigh the highs, but there’s significant variance with the old man. That makes him a high-quality backup, as does the fact he’s as wise as Santa Claus.

16. Gardner Minshew II: The magic has worn off for the most part, and now he’ll likely settle into a long-term backup role, but nobody can rule out the man with the ‘stache.

15. Teddy Bridgewater: The 28-year-old is usually extremely reliable, but he’s allergic to the first-down marker. That lack of big-play ability probably means he won’t win as a starter unless he’s in the perfect spot.

14. Mac Jones: The former Alabama quarterback might need some time at the NFL level, but has the arm talent and “it” factor to become a strong starter in the right spot.

13. Marcus Mariota: There’s no denying he has the talent, and he’s had some nice moments. He’s also only 27, so let’s not rule out redemption in the right place.

12. Jameis Winston: The 27-year-old former No. 1 overall pick put up 5,109 passing yards and 33 touchdowns a year ago. What…what if Sean Payton fixed him?

10. Sam Darnold: He hasn’t been healthy often enough and has certainly not been well-supported. He’s also still only 23 years old. It’s far too early to give up on the 2018 No. 3 overall pick.

9. Tua Tagovailoa: Ditto for this 22-year-old, who struggled in nine starts as a rookie but was always expected to need time.

7. Derek Carr: It’s fair to wonder if he can ever carry an offense on his shoulders, but the 29-year-old was the league’s 10th-highest-rated passer last year.

6. Jimmy Garoppolo: It’s fair to wonder the same about the injury-prone Garoppolo, but the 29-year-old was the league’s eighth-highest-rated passer in his last full season (2019).

5. Justin Fields: We’ll see how ready he is, but the athleticism is awesome and the Ohio State product will likely be a top-10 pick because of that potential.

3. Trevor Lawrence: The highly-touted Clemson product is an even more complete package and looks like the next big thing.

2. Dak Prescott: The two-time Pro Bowler was the league’s most prolific passer before suffering a season-ending ankle injury in October, but he’ll be back for another year of his prime in 2021. Will that come in Dallas?

1. Deshaun Watson: We’ll see if the Houston Texans actually give in and trade the second-highest-rated passer in NFL history in his prime. If they do so, it will be an unprecedented move. Watson is one of the top 10 players in the league.