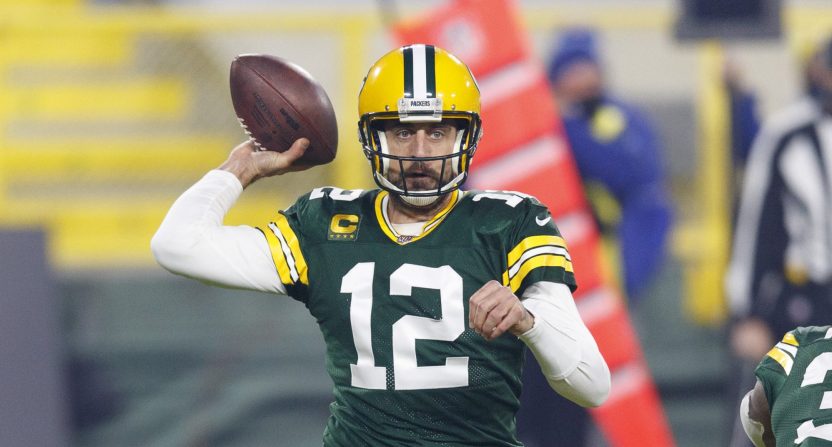 With the 2020 NFL playoffs about to get underway, let’s rank each postseason team’s starting quarterback from top to bottom.

14. Alex Smith, Washington Football Team: His story is great and he has a solid NFL résumé, so you never know what he might be able to do here against the Tampa Bay Buccaneers. But Smith isn’t 100 percent healthy, and he threw eight interceptions to just six touchdown passes this season.

13. Mitchell Trubisky, Chicago Bears: Nobody trusts the fourth-year No. 2 overall pick, even if he did come alive out of nowhere with a 101.9 passer rating in his last five games. Much of that came against weak competition, and he wasn’t great against the Green Bay Packers in Week 17.

12. Jared Goff, Los Angeles Rams: Statistically speaking, Goff was a mediocre quarterback this season. He’s essentially a system quarterback who has nice games from time to time, but falls on his face just as frequently. And on top of that, he’s injured right now.

11. Philip Rivers, Indianapolis Colts: It was yet another up-and-down year for Rivers, who at times looked like a top-10 quarterback and at others was a bottom-10 passer. The problem is he finished poorly while dealing with a toe injury, and he has a poor reputation in critical spots.

10. Baker Mayfield, Cleveland Browns: He threw just one interception in his last nine games, but he also had just 11 touchdown passes during that stretch. The former top pick has begun to execute Kevin Stefanski’s system very well, but he’s not often a game-changer, and we have no idea how he’ll deal with his first career playoff experience.

9. Ben Roethlisberger, Pittsburgh Steelers: Big Ben’s 6.3 yards-per-attempt average ranked in the bottom 10 among qualifiers this season, which is pretty shocking considering his arm and tools. Dropped passes were a big factor, but that alone doesn’t explain his 83.2 passer rating in his last six games. Is he running out of gas? Still, he gets credit for past playoff success.

8. Ryan Tannehill, Tennessee Titans: The AFC’s highest-rated qualified passer since the start of 2019 benefits greatly from Derrick Henry’s dominance on the ground, but the sheer numbers are undeniable. That 33-to-7 touchdown-to-interception ratio is no fluke.

7. Russell Wilson, Seattle Seahawks: His overall talent, improvisation skills, and deep-ball prowess put him above the median here, but Wilson was off for much of the year after a hot start. The seven-time Pro Bowler posted a measly 91.3 passer rating in the second half of the season.

6. Drew Brees, New Orleans Saints: Surprisingly, even though he doesn’t go deep often, the 41-year-old was the league’s highest-rated deep-ball passer in 2020. That’s despite the fact he wasn’t healthy for much of the year and didn’t have top receiver Michael Thomas a lot of the way. Still, he finished strong in Week 17 and might have Thomas back this weekend.

5. Tom Brady, Tampa Bay Buccaneers: The 43-year-old looked like he was toast last year in New England, but has revived his career against all odds with more support in Tampa. The league’s ninth-highest-rated passer threw 12 touchdown passes to just one pick as the Bucs averaged 37 points per game during a four-game winning streak to conclude the regular season.

4. Lamar Jackson, Baltimore Ravens: Jackson regressed to an extent after his MVP 2019 season, but he posted a 115.8 passer rating and was extremely effective with his legs; the Ravens averaged 37.2 points per game during a five-game winning streak to finish the regular season.

3. Josh Allen, Buffalo Bills: The ceiling is damn high — and reachable immediately — for the league’s fourth-highest-rated passer. He exploded with 37 touchdown passes to just 10 picks in his age-24 season, and he had a 117.5 passer rating as the Bills averaged 40.4 points per game during a five-game winning streak to wrap up the regular season.

2. Patrick Mahomes, Kansas City Chiefs: Mahomes wasn’t as consistently dominant this year as he was in 2018 and for much of 2019, but he’s still magic and was still the NFL’s third-highest-rated passer with 38 touchdowns to six picks. Can’t place the reigning Super Bowl MVP any lower than this.