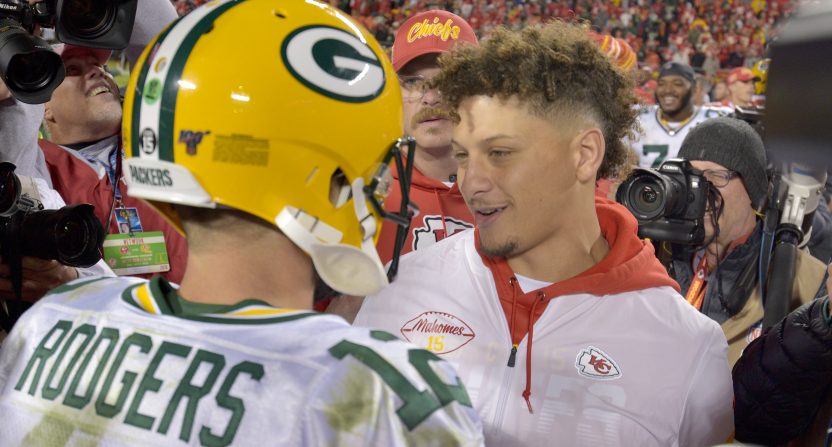 Eight teams remain alive in the race to Super Bowl LV in Tampa, which means there are 16 potential matchups for that game.

Which two teams would make for the best possible Super Bowl? Who would result in the worst?

Let’s rank each of the possible pairings from worst to first.

16. Baltimore Ravens vs. Los Angeles Rams: The Rams laid an egg in their last Super Bowl appearance, and the awesomeness of Lamar Jackson isn’t enough to save a rather dull matchup between teams with limited history.

15. Cleveland Browns vs. Los Angeles Rams: Again, the Rams aren’t doing much for us at this point. The Browns storyline gives this an edge, though.

14. Buffalo Bills vs. Los Angeles Rams: Ditto for the Bills storyline, except Buffalo would likely have a better shot at finally capturing a Lombardi here.

13. Kansas City Chiefs vs. Los Angeles Rams: This would be a rematch of an epic game from 2018, but the Rams aren’t the same team, and there would be blowout potential here.

11. Baltimore Ravens vs. Green Bay Packers: Essentially, an Aaron Rodgers Super Bowl carries more weight than a Drew Brees Super Bowl. His legacy is further along, and his team’s fan base is larger.

10. Baltimore Ravens vs. Tampa Bay Buccaneers: Tom Brady gunning for his seventh ring at least gets this into the top-10, and prioritizes a Bucs Super Bowl over a Saints or Packers Super Bowl in the NFC.

9. Cleveland Browns vs. New Orleans Saints: Now you’re getting a sense of our hierarchy in both conferences: Bucs then Packers then Saints then Rams in the NFC, Chiefs then Bills then Browns then Ravens in the AFC.

8. Buffalo Bills vs. New Orleans Saints: The Bills/Browns narratives are awesome. Drew Brees gunning for Super Bowl No. 2 is also good. Not much history between any of these teams, though.

7. Cleveland Browns vs. Green Bay Packers: Same deal, but sub in Rodgers and the higher-profile Packers for the Saints.

6. Buffalo Bills vs. Green Bay Packers: Ditto for this one.

4. Buffalo Bills vs. Tampa Bay Buccaneers: Either the Bills win their first Super Bowl or Brady wins his seventh. That’s just as sexy.

3. Kansas City Chiefs vs. New Orleans Saints: Patrick Mahomes aiming for a second Super Bowl before turning 26 in what might be Brees’ final game. Easy and compelling narratives there.

2. Kansas City Chiefs vs. Tampa Bay Buccaneers: Even more compelling with Mahomes facing Brady in his quest for that seventh ring.

1. Kansas City Chiefs vs. Green Bay Packers: This one has a slight edge over Mahomes-Brady, because the Packers are a more storied franchise than the Bucs, and this is a rematch of Super Bowl I.