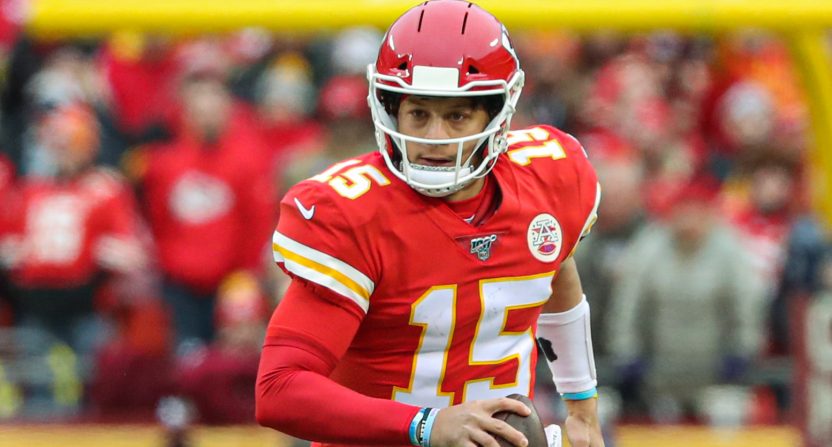 We’re down to the elite eight in the NFL, and there are dozens of ways to compare the four AFC teams and four NFC teams that will hit the field in the divisional playoffs on Saturday and Sunday.

But one of the most important comparisons pertains to the quarterbacks who will lead their respective teams into battle.

Here’s how we rank the remaining starting signal-callers from bottom to top.

8. Ryan Tannehill, Tennessee Titans: That Tannehill just posted the fifth-highest single-season passer rating in NFL history is a testament to the strength of this batch of quarterbacks. He’s been an average quarterback for much of his career, and he was hardly a factor on wild-card weekend.

7. Kirk Cousins, Minnesota Vikings: Cousins has always lacked consistency, but when he’s at his best, he’s one of the top gunslingers in the league. He was the NFL’s fourth-highest-rated passer during the 2019 regular season.

6. Aaron Rodgers, Green Bay Packers: His 2019 campaign might have been the worst among the eight quarterbacks on this list, but Rodgers is still the highest-rated qualified passer in NFL history, a two-time MVP and a Super Bowl champion. That counts for something.

5. Deshaun Watson, Houston Texans: Watson has his ups and downs, but when he’s hot he’s a top-five NFL quarterback. He’s an incredible improviser and he’s remarkable in clutch situations. He led five game-winning drives this season.

4. Jimmy Garoppolo, San Francisco 49ers: He’s the league’s fourth-highest-rated passer since Week 8, and hs 8.6 yards-per-attempt average ranked No. 1 in the AFC during that stretch. He’s phenomenal in clutch situations and he’s become one of the best deep passers in the league. The second half of the season really was a coming-out party for Jimmy G.

3, Russell Wilson, Seattle Seahawks: Wilson experienced an uneven 2019 campaign, but his 31-to-5 touchdown-to-interception ratio was ridiculous and he can still hijack any game at any time. He throws the NFL’s prettiest deep ball and can never be counted out.

2. Patrick Mahomes, Kansas City Chiefs: The reigning MVP has a ridiculous 108.9 career passer rating. He’s probably off to the best two-year start for a quarterback in league history.

1. Lamar Jackson, Baltimore Ravens: The inevitable MVP was the league’s third-highest-rated passer as well as its sixth-leading rusher in one of the most incredible seasons in league history.