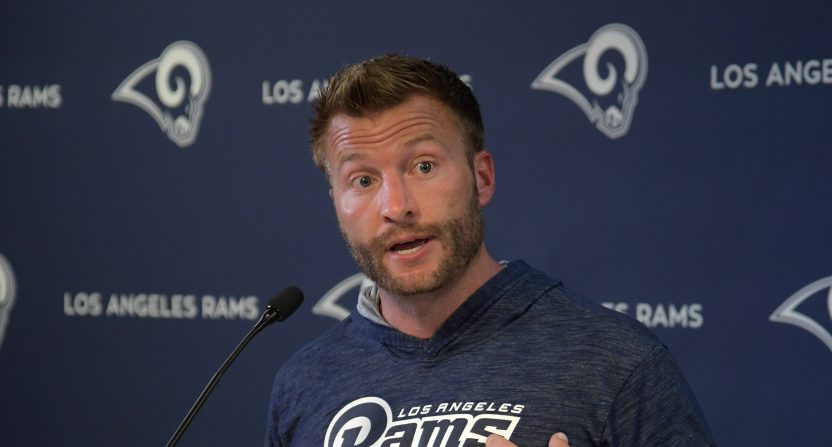 With the 2019 NFL regular season kicking off Thursday night, we figured we’d take the temperature of the league’s 32 head coaches. There’s plenty of room for this to change early and often in 2019, but here’s how we rank all 32 on the brink of a highly-anticipated campaign.

32. Jon Gruden, Oakland Raiders: Yes, Gruden is a Super Bowl champion. But that was 17 years ago. His archaic mind ran the Raiders deeper into the ground last season, and it’s hard to have any confidence in a caricature who won just four games in 2018 and went just 36-44 during his last five seasons in Tampa. Gruden inherited that 2002 Super Bowl team, but he hasn’t been a good head coach since his last run with the Raiders at the turn of the century.

31. Pat Shurmur, New York Giants: He was 5-11 in his debut season with the Giants, and he was just 9-23 in his previous run with the Browns. He doesn’t come across as a legendary leader, and as a coordinator he’s had a top-10 offense just twice in seven seasons. He’s the most “meh” head coach in the NFL.

30. Jay Gruden, Washington Redskins: The supposed offensive guru has produced just one top-10 offense in five seasons with the Redskins. He’s also got a 35-44 record, zero playoff wins and just one postseason appearance. Not sure why he remains employed.

29. Matt Patricia, Detroit Lions: All we can really work with is an abysmal opening season in Detroit, in which the former Bill Belichick disciple went 6-10 with a talented team and ran a defense that generated the second-fewest takeaways in the league. Not a good start.

28. Adam Gase, New York Jets: Weird hire by Gang Green. Gase made the playoffs in his debut season with the Dolphins, but his offenses ranked in the bottom 10 in scoring in each of his three seasons there. He wasn’t much better in 2015 with the Bears, leading many to believe he was riding on Peyton Manning’s coattails in Denver.

27. Bill O’Brien, Houston Texans: He’s had four winning seasons out of five in Houston, but O’Brien’s a wreck when it comes to game management, and he’s won just one playoff game in five years with some very talented teams.

26. Zac Taylor, Cincinnati Bengals: The 36-year-old rookie could be the next Sean McVay, but merely having ties to McVay doesn’t guarantee that, and most new head coaches his age don’t pan out. He’s never even been an offensive coordinator in the NFL, and he faces an uphill battle with the mediocre-at-best Bengals.

25. Kliff Kingsbury, Arizona Cardinals: We’re giving the 40-year-old extra points for his exciting potential as an innovative offensive mind, but he doesn’t have a lot more going for him than Taylor. Dude had a losing record as a college head coach and has zero NFL experience.

24. Freddie Kitchens, Cleveland Browns: The 44-year-old has an intriguing personality, but has almost no experience as a coordinator and none as a head coach. The jury’s still out for now, but he’s off to an encouraging start this offseason.

23. Matt LaFleur, Green Bay Packers: The 39-year-old has learned from the likes of Sean McVay, Kyle Shanahan, and Brian Kelly, and he definitely has the offensive mind you want in 2019. But 2019 was his first year running an offense without an offensive-minded boss, and the Titans had the sixth-lowest-scoring offense in the NFL. That’s a concern, as is the fact we don’t know if he’ll be able to take grip of that locker room.

22. Brian Flores, Miami Dolphins: Under the 37-year-old’s tutelage in 2018, the Patriots defense ranked seventh in the NFL in points allowed. They also gave up an AFC-low 14.8 points per game after their Week 11 bye. Still, he’s got extremely limited experience as a coordinator and the Belichick coaching tree hasn’t exactly been fruitful.

21. Vic Fangio, Chicago Bears: The 61-year-old has never been a head coach at any level, but at least he has a distinguished record as a defensive mind. His Bears defenses improved immensely in back-to-back seasons. They surrendered a league-low 17.7 points per game while leading the NFL with 36 takeaways in 2018. He also had four top-five defenses in his four seasons with the 49ers.

20. Doug Marrone, Jacksonville Jaguars: He has a losing record in four-plus seasons as a head coach, and what happened to the Jags in 2018 was nothing short of a football disaster. An purported offensive mind who had a garbage offense last year in Jacksonville as well as in both of his years in Buffalo, Marrone is coaching for his job in 2019.

19. Kyle Shanahan, San Francisco 49ers: Tough circumstances have gotten the best of Shanahan two seasons into his run in San Francisco, but he’ll plummet here if he doesn’t experience success in 2019. The guy did oversee one of the best offenses in NFL history in Atlanta in 2016, so we won’t condemn him yet.

17. Sean McDermott, Buffalo Bills: He had a winning season right off the bat in Buffalo, taking the Bills to the playoffs for the first time this century. They regressed on paper while getting acclimated to a raw rookie quarterback in 2018, but McDermott’s defense was one of the best in the league. There’s room for the 45-year-old to become a superb head coach, but it hasn’t quite happened yet.

16. Dan Quinn, Atlanta Falcons: On one hand, he took the Falcons to the Super Bowl in 2016. On the other hand, he was partly responsible for an epic collapse in that game, and he’s gone just 25-23 with a talented team in his other three seasons there. Quinn also makes a lot of questionable in-game calls, leaving him in the middle of the pack here.

15. Jason Garrett, Dallas Cowboys: Garrett takes a lot of heat for being bland, and his offensive creativity is certainly lacking. But he’s had just one losing season since 2011, his offenses rank well rather consistently, and he’s even won a couple playoff games in the last five years. Still, a lack of postseason success holds him back in this case.

14. Ron Rivera, Carolina Panthers: He’s a two-time Coach of the Year who’s been to a Super Bowl and has three double-digit-win seasons since 2013. But Rivera still hasn’t put together back-to-back winning campaigns despite having plenty of talent to work with.

13. Mike Vrabel, Tennessee Titans: The 44-year-old posted a winning record in his inaugural season with the Titans. More importantly, his defense was the third best in the league in terms of points allowed. You get the feeling he’s going to have a good, long career as a head coach.

12. Matt Nagy, Chicago Bears: Too early to draw huge conclusions, but the offensive mastermind was 12-4 in his debut season, and it might have been even more successful if not for a kicking disaster in the playoffs. Fangio’s defense helped a lot, though, so we’ll watch for offensive progress from Mitchell Trubisky in Year 2.

11. Mike Zimmer, Minnesota Vikings: He’s had top-12 defenses in all five of his seasons in Minnesota, and he’s got a stellar .594 winning percentage as a head coach. But with all that talent, you need more than one playoff win in half a decade.

10. Anthony Lynn, Los Angeles Chargers: He’s 21-11 as the Chargers head coach, and he led the team to a playoff victory in 2018. He’s on the right track entering his third season with a talented team.

9. John Harbaugh, Baltimore Ravens: He’s had just one losing season out of 11 in Baltimore, he’s a Super Bowl champ, and he’s one of the best commanders of this era. Harbaugh might never be a Hall of Famer, but he’s a top-tier NFL coach. The problem with him is that he’s won just one playoff game since capturing a Lombardi Trophy in 2012.

8. Frank Reich, Indianapolis Colts: You can’t be a top-five head coach based on one season on the job, but Reich couldn’t have asked for a better maiden campaign in Indy. Double-digit wins and a playoff victory out of the gate. He transformed the outlook there, and his future is incredibly bright.

7. Sean Payton, New Orleans Saints: He’s got a championship, eight playoff wins, and a .615 career winning percentage. However, he hasn’t won multiple playoff games in one postseason since doing so when he won that Super Bowl a decade ago.

6. Doug Pederson, Philadelphia Eagles: Dude won the Super Bowl in his second year as a head coach, and has won playoff games without his starting quarterback in back-to-back years.

5. Andy Reid, Kansas City Chiefs: He’s one of the greatest offensive masterminds in the game today, and he’s been killing it for a couple decades. That Super Bowl still eludes him, but Reid consistently has dominant offenses and has put together six consecutive winning seasons in Kansas City.

4. Pete Carroll, Seattle Seahawks: Make that seven consecutive winning seasons for the league’s oldest head coach. The Super Bowl winner and two-time NFC champ is the ultimate players coach, and he continues to get the most out of a team that has been through plenty of ups and downs of late.

3. Bruce Arians, Tampa Bay Buccaneers: He’s a two-time Coach of the Year with a sterling record as an offensive coordinator, and a 49-30-1 head coaching record stemming from his five seasons in Arizona and a successful interim run with the Colts. That notably came during Andrew Luck’s rookie season, but he went on to squeeze a few surprisingly strong seasons out of an aging Carson Palmer. He also played a role in helping Peyton Manning and Ben Roethlisberger evolve. Arians has the résumé, the personality, and the brains. Hard not to love this guy.

2. Sean McVay, Los Angeles Rams: If qualified, McVay’s .750 career winning percentage would be the third-highest in NFL history and the highest among active head coaches. He’s an offensive magician who has already won Coach of the Year and been to a Super Bowl at the age of 33. It’s silly.

1. Bill Belichick, New England Patriots: Duh. The three-time coach of the year has won a record six Super Bowls and is widely considered the greatest head coach in NFL history.