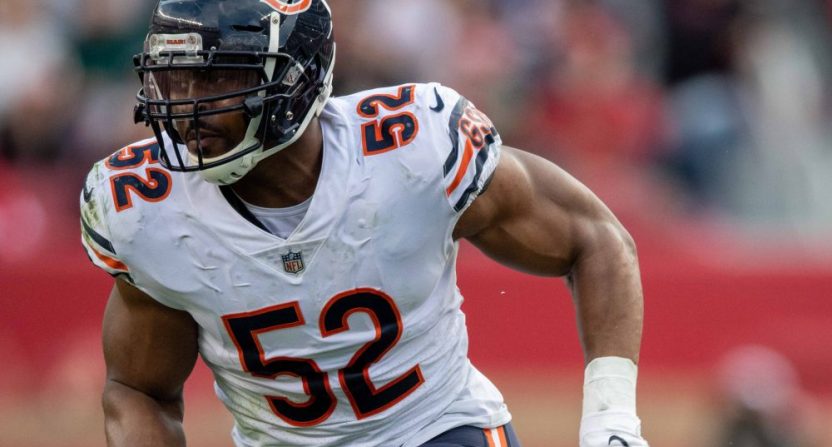 Now that free agency is out of the way in the NFL, we have a feel for what every team’s roster will look like heading into the draft. And thus, we also have a feel for which divisions will be tough and which will be weak, barring big draft changes.

Here’s how we rank the eight NFL divisions during this short lull in the 2019 offseason, with latitude really kicking longitude’s ass.

The NFC North might have sent just one team to the playoffs in 2019, but the Minnesota Vikings and Green Bay Packers underachieved. Both of those teams have top-10 talent and should be back in the picture, especially if Aaron Rodgers can stay healthy and that revamped Green Bay offense can take off. The reigning champ Chicago Bears will continue to be an upper-echelon team and the vastly improved Detroit Lions are also a playoff-caliber squad if Matthew Stafford is on his game. Green Bay and Detroit were two of the most improved teams in football coming out of free agency.

The sky’s the limit for the Andrew Luck-led Indianapolis Colts after a breakout season on both sides of the ball, and only a year ago the Jacksonville Jaguars were Super Bowl contenders. The Tennessee Titans and Houston Texans are also above-average teams with promising young quarterbacks and blue-chip players on both sides of the ball. Throw in that Jacksonville now has itself a more reliable quarterback instead of Blake Bortles and it’s easy to see any of these teams making a playoff run in 2019.

The New Orleans Saints are widely considered a top-three team and a major Super Bowl contender, while the Atlanta Falcons have the same core that nearly won the Super Bowl in 2016. If they have better injury luck, they can compete. Ditto for the Carolina Panthers, who were in the Super Bowl in 2015 and can get back there with Cam Newton and Christian McCaffrey leading the way on offense. And there’s even some hope for the oft-maligned Tampa Bay Buccaneers, who could take a step forward with new head coach Bruce Arians on board.

Are the Cleveland Browns for real? The talent says yes, but we’ve yet to see it. Meanwhile, the Pittsburgh Steelers and Baltimore Ravens are both riding downward trajectories after brutal experiences in March, and the Cincinnati Bengals are as stale as ever. Pittsburgh and Baltimore remain decent, though, while the Bengals are never horrible and the Browns could be special. That leaves this division slightly above the median.

Joe Flacco won’t likely cure what ails the Denver Broncos, while the Oakland Raiders are clearly still rebuilding after last year’s sweeping changes. So only half the division will probably be competitive. Now, the Kansas City Chiefs and Los Angeles Chargers are primo contenders, but the Bolts do seem to have their limitations and the Chiefs have yet to prove themselves trustworthy in January. The NFC North edges this division out because it has more playoff contenders.

The Los Angeles Rams are the defending NFC champs, and they should only get better. The Seattle Seahawks aren’t the team they used to be, but they can never be counted out with Russell Wilson under center. And there’s certainly a lot of optimism surrounding a San Francisco 49ers team that has improved this offseason and will be getting franchise quarterback Jimmy Garoppolo back from a torn ACL. Still, the Arizona Cardinals might be the worst team in the conference and the Rams might be the NFC West’s only true Super Bowl contender.

More often than not the league’s worst division in recent years, the AFC East always deserves extra points for the presence of the New England Patriots. In this particular case, those Pats are the defending Super Bowl champions. And for once, there’s quite a lot of hope surrounding two other AFC East teams. The New York Jets improved by spending big bucks in March, and both the Jets and Buffalo Bills have promising young quarterbacks in Sam Darnold and Josh Allen. But both of those teams will need time, while the tanking Miami Dolphins might be the worst team in the NFL.

The Dallas Cowboys and Philadelphia Eagles are both playoff-caliber teams, but neither are prime Super Bowl contenders (can Dak Prescott or Carson Wentz be relied on?) and the rest of the division is a mess. The ceiling for the Alex Smith-less Washington Redskins is probably mediocrity, while the New York Giants are in full rebuild mode with Odell Beckham Jr., Olivier Vernon and Landon Collins all gone. Plus, Eli Manning is their damn quarterback.