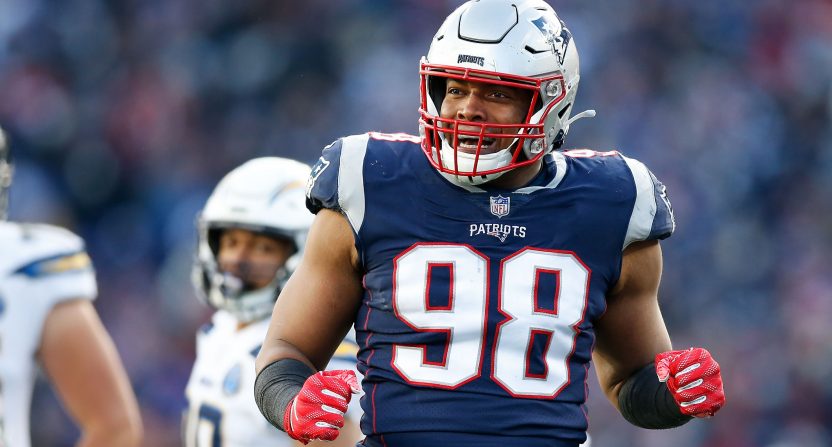 1. DE Trey Flowers: The 25-year-old has just 21 career sacks, but he’s a way better rusher than that number would indicate. He’s also one of the best run-defending edge-defenders in the NFL, and he’s on the rise.

2. S Adrian Amos: Safeties haven’t gotten much love on the market lately, but the 25-year-old Amos has shown glimpses of being special. The key? He’s incredibly strong in pass coverage.

3. S Earl Thomas: It’s problematic that he’s missed 19 games in the last three seasons and is coming off a major injury at the age of 30, but we’re still talking about a six-time Pro Bowler with Super Bowl pedigree. Don’t be surprised if there’s a second act for Thomas.

6. S Landon Collins: The 25-year-old 2015 second-rounder earned defensive player of the year votes in a standout 2016 season. He’s been good since, but he hasn’t lived up to that campaign and he’s a liability in coverage.

7. RB Le’Veon Bell: How much tread is left on his tires? Bell might not be a long-term investment, but one of the most versatile backs in football has the ability to transform an offense in 2019.

8. QB Nick Foles: There’s some magic there. Foles should be in his prime, and he’s got a Pro Bowl and a Super Bowl MVP on his resume. He’s at least a low-end starter, which makes him a top-10 free agent.

9. LB Za’Darius Smith: This stock just might be on the verge of taking off. The 26-year-old pass-rusher has steadily improved during his first four seasons with Baltimore, so we’re projecting here.

10. WR Golden Tate: The 30-year-old is a reliable, experienced wide receiver who can work outside and inside and could play a significant role anywhere in 2019.

11. S Tyrann Mathieu: The Honey Badger is a former All-Pro who played well in Houston last season and could still climb. He’s only 26.

12. OT Trent Brown: The mountain-sized left tackle helped the Patriots win the Lombardi Trophy in 2018, and he’s got the ability to dominate in the right spot. That said, there could be some concern that he’ll struggle outside of that offense.

13. CB Bryce Callahan: One of the best slot cover men in the league, and that’s more important than ever nowadays.

14. S Lamarcus Joyner: A franchise tag recipient in 2018, Joyner probably should have been a Pro Bowl pick in 2017. He was solid again last year. The guy played a big role on the Rams, a team that made it to the Super Bowl.

15. DE Dante Fowler Jr.: Speaking of guys who played a big role on a Super Bowl-appearing team, Fowler really excelled late in his debut season with the Rams. There are risks here, but don’t be surprised if the 2015 No. 3 overall pick starts to live up to his draft hype. He’s still only 24.

16. C Mitch Morse: The versatile center has shown a lot of promise in Kansas City. He has Pro Bowl potential if he can find the right spot and stay healthy.

17. DT Ndamukong Suh: Yet another Rams defender. We all know Suh’s track record; the dude could be a Hall of Famer. He’s not the player he used to be, but he also stepped up late in the year for Los Angeles. He could make a huge difference anywhere he goes.

18. WR Adam Humphries: A steadily improving, reliable slot receiver, Humphries is the type of player who could take off with his second team a la Wes Welker.

19. CB Ronald Darby: The 25-year-old is a strong outside corner who can go toe-to-toe with anyone, but he’s lacked consistency and durability.

20. LB Jordan Hicks: Another strong former Eagles defender who has to stay healthy, but who has Pro Bowl potential when he’s on the field.

21. OT Daryl Williams: The versatile 26-year-old exploded with a magnificent 2017 season, but a knee injury cost him practically all of his 2018 campaign. There’s a lot of potential there, but there will be fears he’s a one-hit wonder.

22. CB Pierre Desir: Another potential one-hit wonder, Desir was superb in coverage down the stretch for the 2018 Colts. But where was the 28-year-old prior to that?

23. OT Ja’Wuan James: The 2014 first-round pick hasn’t lived up to expectations but also hasn’t been a disaster. Somebody will pay him handsomely, and it’s possible he’ll turn into a star.

24. TE Jared Cook: The 10-year veteran has always been solid, but he’s coming off a career season in Oakland at the age of 31. He’s worth big money on a short contract.

25. QB Colin Kaepernick: Yeah, we went there. Dude was a starting-caliber quarterback, even if on the low end, and there’s little reason to believe that’s changed.