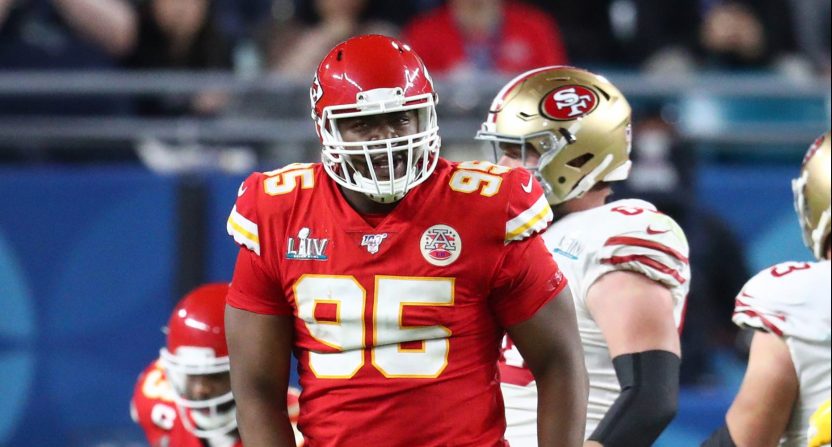 NFL free agency opens up on March 18. A lot could change between now and then, but at this stage, here are the top 25 players on track to hit the open market on that day.

25. TE Hunter Henry: The enticing 25-year-old hit new career highs with 55 catches and 652 yards despite missing a quarter of the 2019 season.

23. QB Jameis Winston: The 2015 No. 1 overall pick has been an interception machine for five seasons, but he led the NFC in passing touchdowns in 2019 and he’s still only 26.

21. WR Robby Anderson: The 26-year-old has gone over 700 yards with at least five touchdowns in three consecutive seasons despite a lack of top-notch support with the Jets.

20. TE Austin Hooper: The 25-year-old Pro Bowler is coming off a breakout season in which he set new career highs with 75 receptions, 787 yards, and six touchdowns.

19. S Anthony Harris: The late-blooming coverage star intercepted a league-high six passes in his first relatively full season as a starter in 2019.

18. OLB Bud Dupree: The 2015 first-round pick was one of just four players to amass more than 10 sacks and more than three forced fumbles in his strongest season yet as a 26-year-old in 2019.

17. DE Everson Griffen: The veteran is on the wrong side of 30, but he’s made four Pro Bowls in the last five years. He should have a few more strong seasons left at the age of 32.

16. S Justin Simmons: The 26-year-old has seven interceptions the last two seasons and was Pro Football Focus‘ highest-rated safety in 2019.

15. RB Derrick Henry: Running backs should almost never get big bucks these days, but Henry is pretty close to an exception after dominating down the stretch. The reigning rushing champion is a difference-maker.

14. G Brandon Scherff: Injuries have been a problem in recent years, but the 28-year-old is a three-time Pro Bowler with dominant skills inside.

13. OT Anthony Castonzo: He could be running out of gas, but the 31-year-old is a consistent pillar as a left tackle.

11. DE Yannick Ngakoue: The 2016 third-round pick and 2017 Pro Bowler has missed just two starts in four years. He’s recorded at least eight sacks in all four of those campaigns, and he’s also forced 14 fumbles in that span.

10. DE Jadeveon Clowney: The exceptional all-around edge defender isn’t a sack machine, but Clowney is a three-time Pro Bowler with elite abilities at the age of 26.

9. OLB Shaquil Barrett: The 27-year-old exploded with a league-best 19.5 sacks in his first-ever full season as a starter in 2019.

8. OT Jack Conklin: The 2016 first-round pick and former first-team All-Pro incredibly was PFF‘s sixth-highest-rated right tackle despite coming off a torn ACL in 2019.

7. WR Amari Cooper: A four-time Pro Bowler before turning 26, Cooper is coming off a season with a career-best 1,189 receiving yards and eight touchdowns.

6. QB Ryan Tannehill: The streaky former top-10 pick is coming off a breakout season in which he was the league’s highest-rated qualified passer. Could the 31-year-old be a late-bloomer?

5. QB Teddy Bridgewater: Still only 27, Bridgewater has won 22 of his 34 career starts, including all five in place of an injured Drew Brees in 2019.

4. QB Tom Brady: He fell off a cliff in 2019, but Brady can never be counted out. With enough support, he could have another elite year in him.

3. DT Chris Jones: The 25-year-old has become one of the best defensive players in the entire league. He’s recorded 24.5 sacks in 29 games the last two seasons, and the Chiefs probably wouldn’t have won the Super Bowl without him.

2. QB Drew Brees: Brees is 41 now, but 2019 was his highest-rated season yet. He could have several standout seasons left.