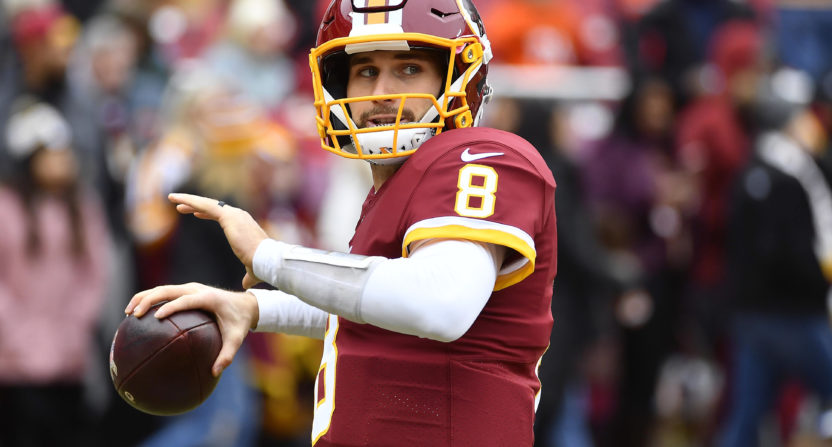 The deadline for NFL teams to apply franchise tags on their free agent players was March 6 at 4 p.m. ET. Players who get tagged essentially have a one-year contract with their team, valued at the average of the top five salaries at their position. They can still negotiate a long-term deal with their team, but if the sides can’t reach an agreement, the one-year deal is locked in.

The Chicago Bears put a transition tag on cornerback Kyle Fuller, meaning the Bears have the right of first refusal to match any contract offer he receives.

Now that the deadline has passed, we know who will be available when the new league year begins March 14 and the free agency period officially begins. With free agent shopping set to get underway in mere days and the franchise tag window closed, let’s take a look at the top players slated to hit the open market.

2. QB Kirk Cousins — It’s been a long time since a franchise-caliber quarterback hit free agency in his prime, but that’s about to happen with Cousins.

3. QB Case Keenum — A poor man’s Cousins, the 30-year-old won 11 of 14 starts while posting the seventh-highest passer rating in the league during a breakout third season in Minnesota. But was that an anomaly?

4. QB Teddy Bridgewater — Certainly a wild card, but he’s only 25 and looked destined to have a breakout season before tearing up his knee in the summer of 2016.

5. QB Sam Bradford — Durability is a concern and he might have a ceiling anyway, but the 30-year-old posted the highest completion percentage in NFL history when he was last fully healthy in 2016.

6. G Andrew Norwell — Coming off a breakout All-Pro season in which he was Pro Football Focus’ third-highest-graded guard, the 26-year-old is likely to become the highest-paid interior offensive lineman in NFL history.

8. TE Jimmy Graham — The 31-year-old was one of just three players with 10-plus receiving touchdowns last season, giving him 16 the last two years (more than any tight end in the NFL).

9. QB AJ McCarron — The former Alabama star has looked really good when given opportunities behind Andy Dalton the last four years. He should get a shot to compete for a starting role at the age of 27.

10. DT Sheldon Richardson — The 27-year-old has the ability to take over games when he’s on.

11. OT Nate Solder — Not sure how much he has left, but he’s an elite left tackle and the Patriots have made the Super Bowl during each of his last three healthy seasons. The 29-year-old will get a bump for that.

12. WR Sammy Watkins — With the Rams putting their franchise tag on Joyner, Watkins is free to explore the open market. Still just 24, he scored eight touchdowns in his first (and possibly only) season with the Rams.

14. CB Malcolm Butler — The Super Bowl fiasco didn’t help, but Butler is still a big-moment player coming from the most feared organization in football. He’s good enough to be a top corner somewhere.

15. Packers S Morgan Burnett — Entering his ninth season but still on the right side of 30, somebody will value Burnett’s experience enough to give him big bucks in a shallow pool.