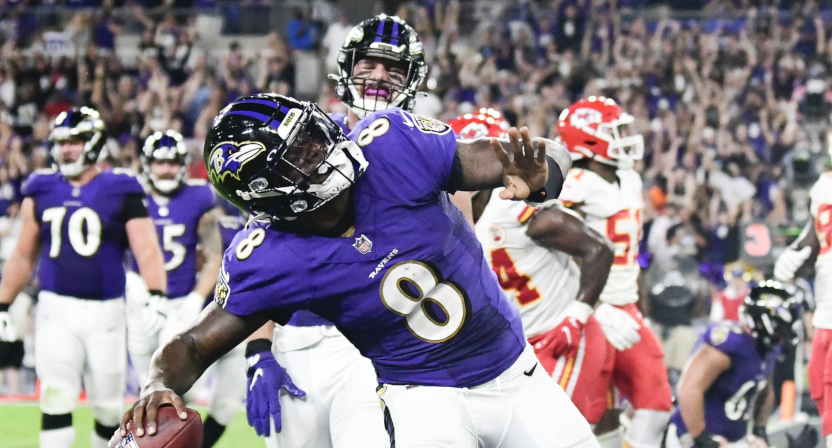 This week’s Sunday Night Football game between the Baltimore Ravens and Kansas City Chiefs went right down to the wire, with Baltimore eventually picking up a 36-35 home win. Two late plays were particularly crucial there. First, Baltimore defensive lineman Odafe Oweh (the Ravens’ second pick in the 2021 NFL draft, 31st overall) punched the ball out of Kansas City running back Clyde Edwards-Helaire’s hands inside the final two minutes (with the Chiefs close to field goal range) and then recovered it himself:

That meant the Ravens got the ball at their own 34 with 1:20 left. Quarterback Lamar Jackson (who scored their go-ahead touchdown on a one-yard run with 3:18 left in the fourth quarter) then ran twice for three yards total, and then found Sammy Watkins for six yards. That set up a fourth-and-one with the game on the line. And before deciding to go for it, Baltimore coach John Harbaugh confirmed that Jackson (seen above celebrating that touchdown) wanted to do that:

And Jackson then converted the fourth-and-one himself:

Lamar Jackson runs for the first down on 4th-and-1 to lock up the Ravens win! Incredible SNF game. 🏈 pic.twitter.com/absZ8tKP4s

On the day, Jackson had 239 passing yards (with 18 completions on 26 attempts), 107 rushing yards, and three total touchdowns (two rushing, one passing), albeit with two interceptions. And he managed to best Patrick Mahomes, who had 24 completions on 31 attempts for 343 yards with three touchdowns and an interception for the Chiefs. And that gave the Ravens their first win against Kansas City since a 9-6 game in 2012.