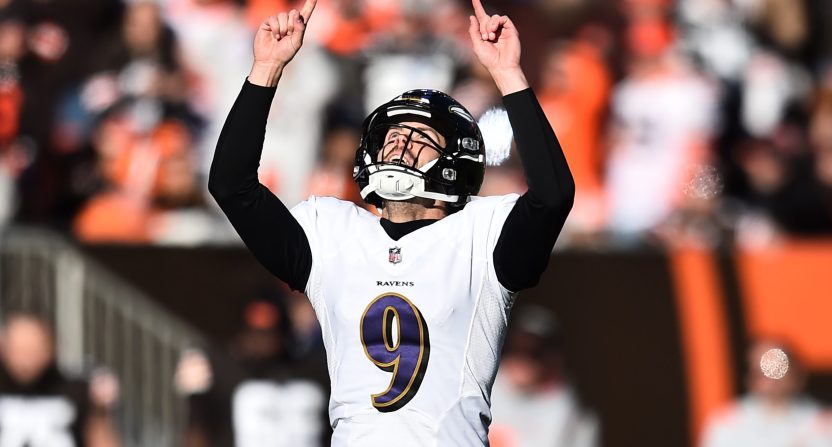 Veteran NFL kicker Justin Tucker has been one of the best kickers in NFL history through his ten-year career with the Baltimore Ravens, and he has now been paid as such by the Ravens organization.

The Ravens agreed to terms on a four-year contract extension for Tucker on Monday worth $24 million which will keep Tucker in Baltimore through the 2027-28 season.

It is certainly a huge commitment for a kicker, but Tucker has simply been as steady as anyone to ever play the position, making  91 percent of his kicks throughout his career which is the highest percentage in NFL history.

He also broke the record for the longest field goal made in NFL history last season when he hit a game-winning 66-yard-field goal as time expired in Week 3 against the Detroit Lions.

There are few that argue Tucker is the best kicker of this generation, and many see this as a rightful contract extension for the 32-year-old kicker.

It's appropriate for the NFL's all-time FG accuracy leader to raise the bar for kicker pay. https://t.co/NHFVr4omgn

Best in the business. https://t.co/imvhyRXARh

🐐 can eat all the crab cakes he wants https://t.co/uiHPyJVf1a

He owns the longest FG ever at 66 yards (to win a game as time expired).

He's made 57 straight FGs in the fourth quarter/overtime.

He's *never* missed a kick in the final minute of regulation.

It is certainly interesting that the Ravens have agreed to terms on an extension with Tucker before doing so with quarterback Lamar Jackson considering quarterback is a significantly more important position.

That being said, the importance of having a kicker that can be relied on to be near perfect like Tucker has been is extremely underrated and the Ravens have benefitted greatly from having Tucker over the years.

By the time Tucker is at the end of his contract with the Ravens, he will be 38 years old.

Unless we see a similar situation to that of legendary kicker Adam Vinatieri who played into his mid-40s, this likely means that Tucker will finish out his career with the Ravens, which seems to be a relief for Ravens fans.