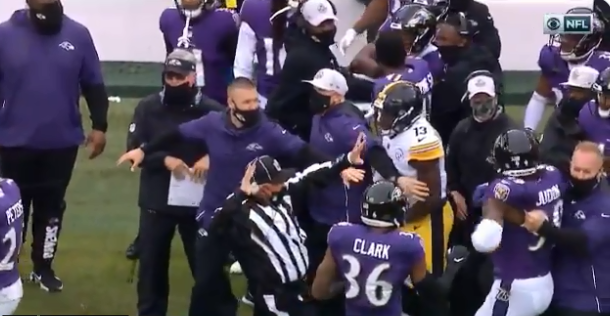 You know the rule. Even if it was accidental, if you’re going to contact a referee during an NFL game, you run the risk of being immediately ejected. Baltimore Ravens linebacker Matt Judon was reminded of that on Sunday when he made contact with a ref during a heated fight between the Ravens and Pittsburgh Steelers.

The fight in question stemmed from Baltimore cornerback Marcus Peters and Pittsburgh wide receiver Diontae Johnson getting into it on the ground during a play. From there, the sidelines got involved, and during the fracas, Judon is seen making contact with an official in a very abrupt and potentially dangerous way.

Matthew Judon makes contact with a ref and gets ejected. pic.twitter.com/6UwAjSNTCI

While it might seem at first like Judon was throwing a punch at the referee, it actually appears that he was trying to get free from the person holding him back, and when his arm came free, the momentum carried it directly into the ref standing in front of him. Certainly not intentional, but the rules are the rules.

Peters’ and Johnson’s penalties ended up offsetting, however, Judon got hit with a 15-yard penalty before being sent off the field and into the locker room.

While the Ravens led 17-7 at halftime, they faltered in the second half and the Steelers came back to win the game, 28-24. Hard not to see the loss of three key players during the game as part of the reason why the Ravens lost their momentum.