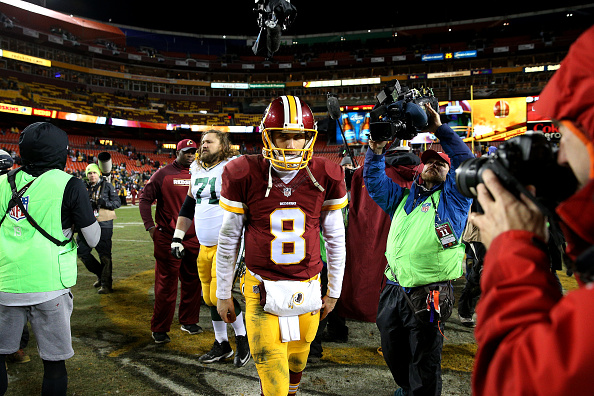 The Washington Redskins have been looking for a reliable long-term quarterback basically since Mark Rypien, and right when it looks like they might have found one in Kirk Cousins, they might be willing to to let him walk.

According to ESPN’s Adam Schefter, Washington has broken off talks with the QB and don’t necessarily plan on resuming them any time soon.

Cousins is a free agent, and if he and Washington doesn’t agree to a deal, the team will have two options: hit Cousins with the franchise tag, which would require them to pay him the average salary of the league’s top five quarterbacks for one year, or let him walk. Washington has until March 1 to decide whether to franchise Cousins, which would award him about $20 million in salary.

The team has indicated it wishes to re-sign Cousins, but there’s apparently a wide gap in what the front office thinks he’s worth and what he thinks he’s worth. Really, it’s pretty easy to imagine why this might be. On one hand, Cousins had an awesome year in 2015, throwing for 4,166 yards and 29 touchdowns while leading Washington to a surprising NFC East title. On the other hand, Cousins had never been an effective NFL QB before last year and has started only 25 NFL games.

If Cousins does hit free agency, he’ll probably be pretty coveted. A lot of teams need quarterbacks, and he has shown pretty extended flashes of being a good one. Whether or not you think he can be a star, he’s clearly capable of being a capable signal-caller.

It feels hard to imagine Washington lets him walk, though. The team has struggled for so long to find a competent quarterback, and after the RG3 fiasco, the decision-makers in D.C. presumably want to lock up a long-term answer at the position.

Then again, when it comes to Dan Snyder, no one really knows.