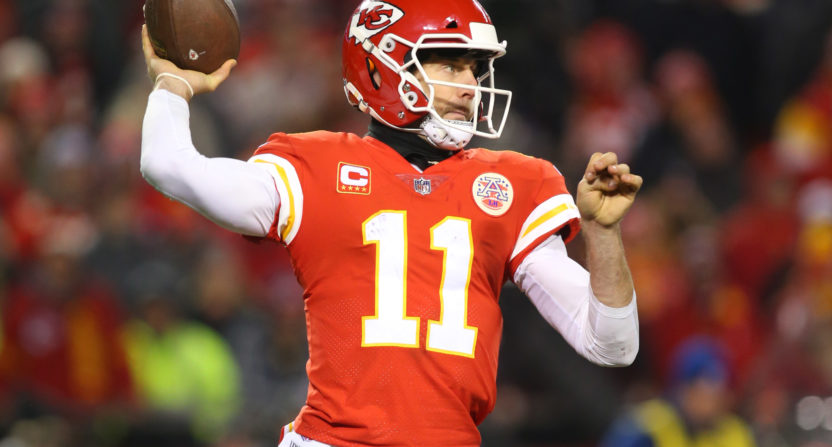 Terez A. Paylor of The Kansas City Star reports that the Kansas City Chiefs are trading quarterback Alex Smith to the Washington Redskins.

Sources tell The Star that the Chiefs have reached an agreement to trade Alex Smith to Washington. The story: https://t.co/vlNuGMAlVS

It’s unclear what exactly the Chiefs are getting in return for Smith, but NFL.Com’s Ian Rapoport reports that the trade involves “picks and a player.” He also says that the trade will be finalized on Wednesday.

The #Chiefs are trading QB Alex Smith to the #Redskins, source confirms (as @TerezPaylor reported). It involves picks and a player. Huge deal.

There is an agreement in principle for Alex Smith to go to the #Redskins. The deal will be finalized tomorrow. This means Kirk Cousins will be a free agent. Mega-deal.

NFL blockbuster trades like this are rare, and especially on Super Bowl week (heck the NFL “offseason” is already more active than MLB’s).

But this is a very interesting deal, and particularly for Washington, of course. This ends any speculation about a Kirk Cousins return to Washington, and now begins the debate on if the Redskins upgraded the position or not.

Smith was terrific for the Chiefs in 2017, throwing for 4,042 yards, 26 touchdowns, five interceptions, and leading the league with a 104.7 passer rating. The 33-year-old been criticized over the years for his struggles as a deep-ball passer, but as Pro Football Focus’ statistics show, he was tremendous in that department in 2017.

Alex Smith was among the most accurate deep ball throwers

Then again, Smith had tremendous playmakers in Kansas City (Tyreek Hill, Travis Kelce, Kareem Hunt, etc), along with terrific playcalling and scheming from Andy Reid and Matt Nagy to get the most out of his abilities. It remains to be seen if he can put up the same type of production in Washington.

For the Chiefs, they clear up $17 million in cap space and clear the way for Patrick Mahomes to be their starting quarterback in 2018. Even with Smith’s statistical success, the decision for Kansas City to move on from him is certainly no surprise.  The team repeatedly failed to get over the hump in the postseason with Smith at quarterback, and they selected Mahomes with the 10th overall pick in the 2017 NFL Draft. It was time for Kansas City to move on and see what they have in Mahomes, who’s known for having exceptional arm talent and playmaking ability — as he showed in Week 17 — that the Chiefs hope can take their highly talented roster to the next level.

And then we’re left wondering what this all means for Kirk Cousins. Well, we already know it means he’s going to get paid a lot of money by some team in free agency. The 29-year-old is the clear top quarterback on the free-agent market, after ranking as a top-12 quarterback by passer rating in each of the last three seasons. The Jacksonville Jaguars seemed like a natural fit, but reports are that they intend to go into 2018 with Blake Bortles as their starter. The Denver Broncos would seem like a pretty good bet right now, with the always-aggressive John Elway trying to maximize the Broncos’ window of contention with a win-now defense.

UPDATE: The Redskins have already agreed to a four-year, $94 million contract extension with Alex Smith. The deal includes $71 million in guarantees.

The #Redskins gave QB Alex Smith a 4-year extension worth $94M, source said. He gets a whopping $71M in guarantees.

UPDATE II: The Chiefs will get a third-round pick and cornerback Kendall Fuller from Washington in the deal.

In Alex Smith trade, Chiefs will receive third-round pick And CB Kendall Fuller, per @FieldYates. So there’s the trade.