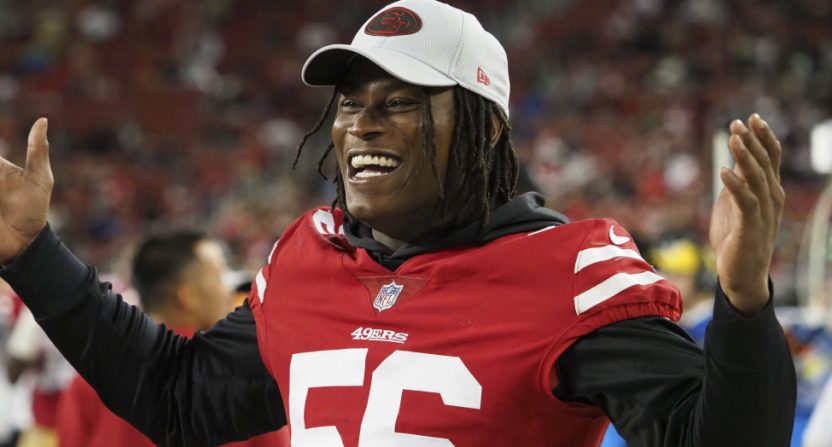 It turns out it’s the Washington Redskins and not the Cleveland Browns who made the controversial move of claiming linebacker Reuben Foster on waivers. Foster, the former Alabama star picked 31st overall in the 2017 NFL draft by the San Francisco 49ers, was released by that team Sunday morning after he was arrested in Tampa Bay Saturday night on a first-degree misdemeanor domestic violence charge. His arrest came less than a day ahead of the 49ers’ game against the Buccaneers.

That arrest marked the third instance of charges against Foster this year, following charges of marijuana possession in Alabama in January and domestic violence charges in California in February. But that didn’t stop the Redskins from claiming him. Interestingly enough, though, this came after ESPN’s Adam Schefter initially reported that Foster was headed to the Browns. Schefter has since deleted that tweet and apologized with a correction; here’s his initial tweet screencapped.

Reuben Foster claimed by NFL team. Per my sources, which are Schefter deleted tweets, that team is the #Browns. pic.twitter.com/GVX0kDjVxP

Update and apologies: Was texted that the Browns claimed Reuben Foster. Information was premature. Foster has been claimed, per league sources. But NFL has declined to name team. Now awaiting Foster's destination.

And his update with the actual destination:

Former 49ers' LB Reuben Foster was claimed by the Washington Redskins, per source.

Now the question becomes whether or when the league will suspend him.

What’s perhaps particularly interesting about this is as per NFL Network’s Tom Pelissero, the Redskins were the only team to actually file a waiver claim on Foster:

The #Redskins were the only team to put in a waiver claim on Reuben Foster, I’m told.

And if the Browns had put in a claim, they would have been successful; ESPN’s Dianna Russini noted that the waiver priority is based off the current standings in reverse, so the 4-6-1 Browns would have landed Foster before the 6-5 Redskins if they had filed a claim. Thus, it seems that Schefter’s source was particularly wrong here, with the Browns not even making a move for Foster.

In most cases, an error like this on a transactional move wouldn’t necessarily get a lot of attention beyond fans of the teams involved. But the Foster story is a little bigger than usual thanks to the repeated claims of domestic violence against him, which include the aforementioned February charges, a domestic dispute call from last month that didn’t result in charges, and then the charges from Sunday, all involving the same woman. Here’s more on the latest incident from The San Francisco Chronicle:

In Tampa on Saturday, according to police there, the couple got into an argument, and “Foster slapped her phone out of her hand, pushed her in the chest area, and slapped her with an open hand on the left side of her face.

A source close to the victim’s family said she was taken to a hospital by ambulance, diagnosed with a concussion and then released late Saturday night. The source said she has returned home to Louisiana to be with family, is bothered by light and sounds, and is unable to drive or go to work.

Bringing in Foster after that has already led to a lot of backlash towards the Redskins, and the NFL’s already announced that he’ll be placed on the commissioner’s exempt list (paid, and not suspended, but unable to practice or play) while they “continue to review the matter.” So we’ll see what happens there. But the Schefter report is particularly interesting, as even though it didn’t stay up for long and was corrected, it led to a lot of backlash towards the Browns over something they apparently didn’t even do.