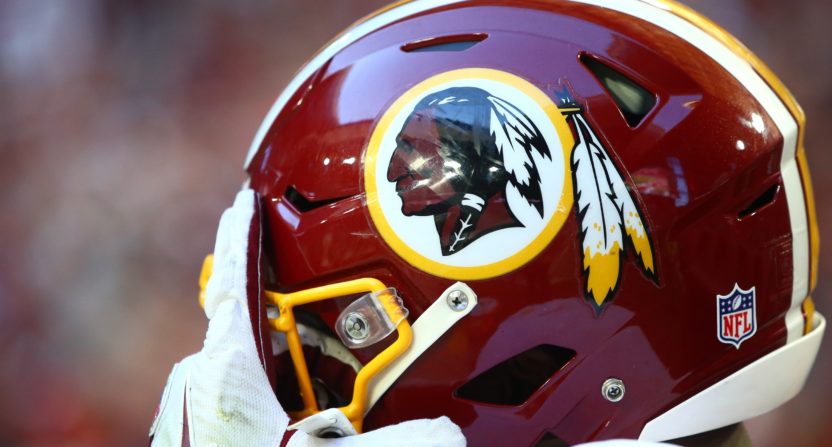 Today’s least surprising news story of the day comes out of the mouth of NFL Commissioner Roger Goodell, who said on Tuesday that the Washington Redskins won’t be changing their logo or name.

On Tuesday while appearing on Golic & Wingo, Goodell was asked about if Redskins owner Dan Snyder had changed his opinion about changing his team’s name. Here was Goodell’s response:

“I don’t see him changing that perspective.”

This news comes one day after the Cleveland Indians and Major League Baseball were met with praise after announcing that the 2018 season would be the last season in which Cleveland would be using the Chief Wahoo logo.

Here was Indians’ chairman Paul Dolan’s statement on the change:

“We have consistently maintained that we are cognizant and sensitive to both sides of the discussion,” Dolan said in a statement issued by M.L.B. “While we recognize many of our fans have a longstanding attachment to Chief Wahoo, I’m ultimately in agreement with Commissioner Manfred’s desire to remove the logo from our uniforms in 2019.”

The announcement was a long time coming and makes complete sense. Phasing out the logo is the correct thing to do.

Meanwhile in the NFL, the Washington Redskins operate both under a blatantly racist name and use a logo that is also offensive. However, there is still no sign that, despite public support or changing their name and logo, Washington’s NFL will follow in Cleveland’s footsteps.

“Dan Snyder has really worked in the Native American community to understand better their perspective, and I think it’s reflected mostly in a Washington Post poll that came out in [May 2016] that said over nine out of 10 Native Americans do not take that in a negative fashion, the Redskins’ logo or the Redskins’ name, and they support it,” Goodell told Golic & Wingo.

The poll that Goodell is referring to was conducted in 2016 by the Washington Post and surveyed 504 Native Americans. A similar poll was done in 2004 by the Annenberg Public Policy Center and it came to the same conclusion.

However, after the Indians announced their change on Monday, the Change the Mascot campaign that has previously criticized both teams released this statement from Oneida Nation representative Ray Halbritter.

“Cleveland’s decision should finally compel the Washington football team to make the same honorable decision. For too long, people of color have been stereotyped with these kinds of hurtful symbols — and no symbol is more hurtful than the football team in the nation’s capital using a dictionary-defined racial slur as its team name. Washington Owner Dan Snyder needs to look at Cleveland’s move and then look in the mirror and ask whether he wants to be forever known as the most famous purveyor of bigotry in modern sports, or if he wants to finally stand on the right side of history and change his team’s name. We hope he chooses the latter.”

Despite the racist history that is relevant anytime someone says Redskins or looks at Washington’s logo, Snyder continues to believe that his team is exempt from being racist. Somethings sadly look like they’ll never change.