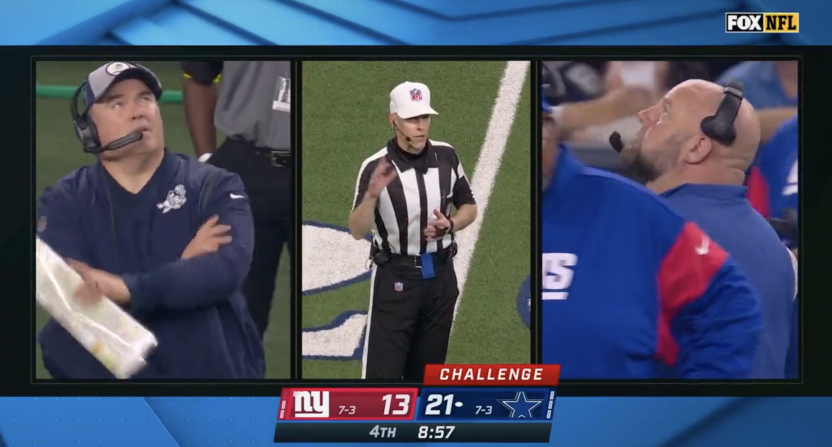 It’s pretty common for a home crowd to get upset with the referees after a close call doesn’t go their way, but Dallas Cowboys fans had another reason to be upset with one particular official during Sunday evening’s game against the New York Giants.

The Cowboys threw the challenge flag on a catch attempt from Ceedee Lamb at the back of the end zone after the referee ruled that Lamb did not get both feet in bounds with possession of the ball. The Cowboys thought Lamb did get both feet down, and when the referee returned from the review, it initially appeared as though he would be giving the fans in Cowboy stadium some good news.

If you need someone to deliver bad news just after getting your hopes up, this is your man. pic.twitter.com/iAVjgunQ9E

“After reviewing the play, the receiver controlled the ball, the right foot was down in bounds,” the referee began, as the crow began to cheer.

But then the official delivered bad news.

“Left foot, toe then heel out of bounds,” the referee. “Pass is incomplete.”

Whether it was a deliberate troll or not, the official clearly teased the Cowboys fans in attendance, and the NFL world had plenty to say about it.

The ref announcing why CeeDee Lamb’s catch was incomplete: pic.twitter.com/FEvuP11dzh

If the ref was trying to describe exactly what a catch was then he just did an amazing job.

that ref knew how to build that up

Crying at that ref announcement, can’t decide if he was intentionally trolling

The moral of this scenario is that fans should listen to the whole announcement before reacting.