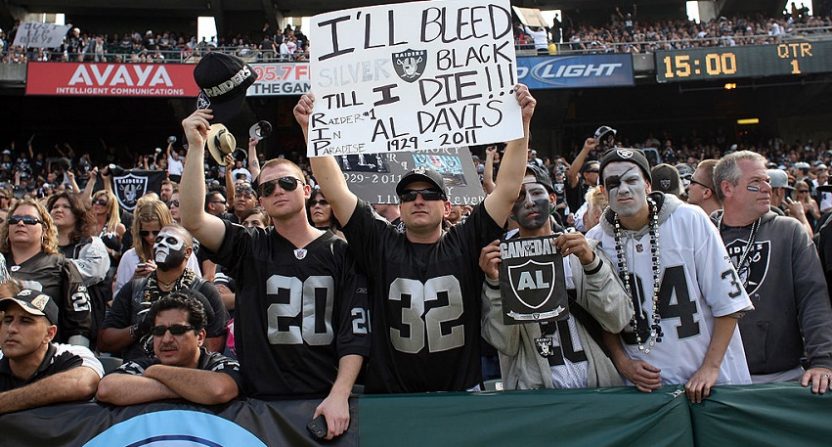 The Raiders still have at least two more years in Oakland, unless spurned fans bail on the team and owner Mark Davis decides to play in San Antonio or share Levi’s Stadium in San Francisco with the 49ers in the interim.

But the news that the Raiders will soon be moving to Las Vegas gives us a chance to reflect on the team’s two extended stretches in the Bay Area (interrupted by a 13-year run in Los Angeles).

How they fared in each stint

1995-2016 in Oakland: 143-209 with four playoff wins and one Super Bowl loss — Only Detroit and Cleveland had lower winning percentages in the last 22 years.

1982-1994 in Los Angeles: 118-82 with six playoff wins and a Super Bowl victory — Only San Francisco, Miami, Washington and Chicago had higher winning percentages during that 13-year stretch.

In their first 35 years in existence, the Raiders won more games (313) and had a higher winning percentage (.617) than any other team in professional football. And only one team (Dallas) had more playoff wins. Then they moved back to Oakland in ’95 and made the playoffs just four times over the next 22 years.

The Raiders were a replacement team: The AFL only put a franchise in Oakland after the team that was supposed to represent Minneapolis bolted for the NFL just after the league’s first draft. Los Angeles Chargers owner Barron Hilton threatened to pull out unless a second team was placed on the west coast, so Oakland was awarded a team that inherited Minneapolis’ draft picks.

They were supposed to be called the Oakland Señors after that name somehow won a name-the-team contest: They took heat, and a few days later they went with Raiders instead.

They were terrible before Al Davis was named head coach in 1963: The 33-year-old had been a wide receivers coach in San Diego. The Raiders went 9-33 in three seasons before hiring Davis, but then went 23-16-3 under Davis. Davis left in ’66 to become AFL commissioner, but then the merger with the NFL went down and Davis returned as part-owner. One year later, the Raiders won the 1967 AFL championship with a 13-1 record (they were destroyed by the Packers in Super Bowl II).

1980 was a wild year: Not only did the Raiders win the Super Bowl despite the fact Davis traded popular quarterback Ken Stabler, but Davis — frustrated that the NFL blocked his attempt to move to Los Angeles — sued the league…and won. The Raiders moved into Los Angeles Memorial Coliseum in ’82.

In LA in 1983, they became the first AFL graduate to win three Super Bowls: They stood alone in that department until the Patriots won their third championship in 2004.

In 1989, the Raiders became the first team in pro football history to hire a black head coach: Art Shell went 54-38 during his original six-year stint.

Davis also feuded with Hall of Famer Marcus Allen: It’s believed that he essentially benched the back for several seasons. There are many theories as to why exactly Davis treated Allen the way he did.

After losing Super Bowl XXXVII to Gruden, the Raiders missed the playoffs in 13 consecutive years: Davis died in the ninth year of that drought, which was finally broken by Derek Carr and Co. last season.

In Oakland and LA, the Raiders never played a home game in a stadium built after 1970: Oakland–Alameda County Coliseum remains their hellish home until they move to Nevada. LA Coliseum was even older.

25: Hall of Famers. Only six franchises have more.

6: General managers in franchise history, including only three — Davis, Hue Jackson (de facto) and Reggie McKenzie in the last half-century.