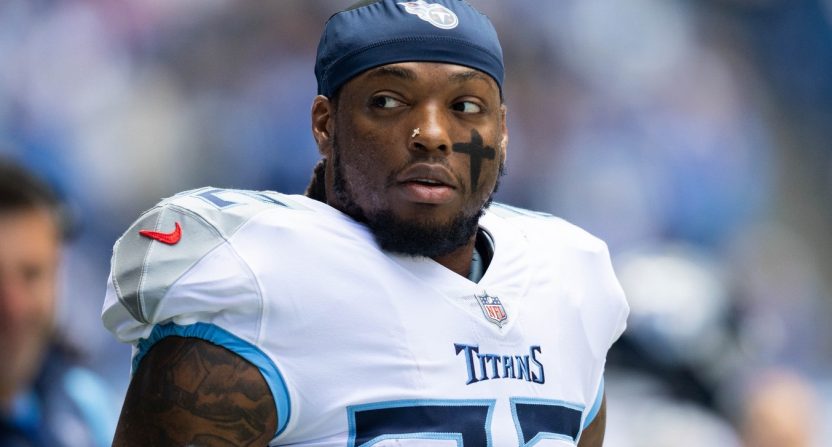 Free-agent running backs are either preparing to get a call from the Tennessee Titans or hoping for their agents to contact the team in light of news that superstar Derrick Henry is having surgery Tuesday to repair a foot injury.

Henry suffered what’s been reported as a broken bone in his right foot (the fifth metatarsal, to be exact). Titans coach Mike Vrabel told reporters that Henry will undergo surgery Tuesday morning.

When exactly Henry suffered the injury isn’t clear, but he came out of Week 8’s game versus the Indianapolis Colts midway through the first quarter. He was seen on the sideline with the shoe off his right foot, seeing if he could walk.

not sure if it happened on this play but it’s the only thing i can find pic.twitter.com/7zK9oGhiY8

Apparently, the running back felt he could still play and it’s possible he didn’t suffer a broken bone until later in the game. Henry went back into the game and eventually finished with 28 carries for 68 yards, his lowest rushing total of the 2021 season.

With the injury and surgery, however, Henry is expected to be out six to 10 weeks. As NFL Network’s Ian Rapoport reported, returning in six weeks would be considered a quick recovery and unlikely. Eight is probably the more realistic timetable, though Titans coach Mike Vrabel didn’t want to put a timeline on Henry’s return.

But with reports of the injury, available running backs soon began to trend on Twitter. If you were wondering why Todd Gurley, for example, was a trending topic Monday morning, his name was mentioned frequently as a possible replacement for Henry in Tennessee.

Gurley played last year for the Atlanta Falcons after five seasons with the Los Angeles Rams (the team was in St. Louis for his rookie year). In 15 games, he rushed for 678 yards on 195 carries with another 164 yards on 25 receptions.

Adrian Peterson initially is signing to the Titans’ practice squad with the expectation he will be added to active roster, per source. https://t.co/bUaqEOOV5G

For now, however, it appears that the Titans will give Adrian Peterson the first shot at replacing Henry — or at least filling his roster spot. According to ESPN’s Adam Schefter, Peterson signed with Tennessee and was added to the team’s practice squad. But the expectation is that he’ll be moved to the Titans’ active roster, likely by the time Tennessee plays the Rams in Week 9.

Is Peterson a better choice than Gurley? Last season with the Detroit Lions, the 14-year veteran compiled 604 yards on 156 carries. His average of 3.9 yards per carry was barely better than Gurley’s 3.5.

This is weird to say:

But maybe Peterson is more willing to accept being a role player rather than a featured back, though he began last year as the Lions’ starting running back over D’Andre Swift and Kerryon Johnson. He’s certainly proven himself to be extremely durable, which may be the biggest reason Tennessee opted to sign him.

Don’t the Titans have other running backs already on the roster that could fill in for Henry? Well, not really. For one thing, no one would expect to play much behind Henry, who’s averaged 340 carries during the past two seasons. Jeremy McNichols has only seven carries this season. The team’s second-leading rusher is quarterback Ryan Tannehill with 165 yards.

This is ridiculous speed at his size. 🔥💪🏈 pic.twitter.com/BTLVUZSUuJ

The Titans could pursue a trade before Tuesday’s (Nov. 2) deadline at 4 p.m. ET. Possible targets could include Tampa Bay’s Ronald Jones or Tevin Coleman from the New York Jets. Maybe Chris Thompson (Bears) or Duke Johnson (Dolphins), who are currently on practice squads. Marlon Mack has asked the Colts to trade him, but it sure seems unlikely that Indianapolis would help out an AFC South rival — even if catching the Titans in the division probably isn’t possible.

Alfred Morris rushes for 11-yds for a 1st down into the red zone #Giants 7 #Eagles 3 Q1 pic.twitter.com/8cMwTU3mUG

So free agency seems a more viable path for Tennessee, but the options aren’t great. Other available running backs besides Gurley include Frank Gore (38 years old, rushed for 653 yards with the New York Jets last year), D’Onta Foreman (95 yards with Tennessee), Alfred Morris (238 yards for the New York Giants), Kerryon Johnson (181 for the Detroit Lions) or T.J. Yeldon (70 yards with the Buffalo Bills).

At 6-2, the Titans have the best record in the AFC. But will that continue with Henry likely to miss the rest of the regular season? With the Texans (twice), Dolphins, and Jaguars on their remaining schedule, maybe. But the Rams, Steelers, Patriots, and 49ers also figure to present formidable competition. Tennessee will almost certainly need more from Tannehill, tight end MyCole Pruitt, and receivers A.J. Brown and Julio Jones (an acquisition that could be even more important now).