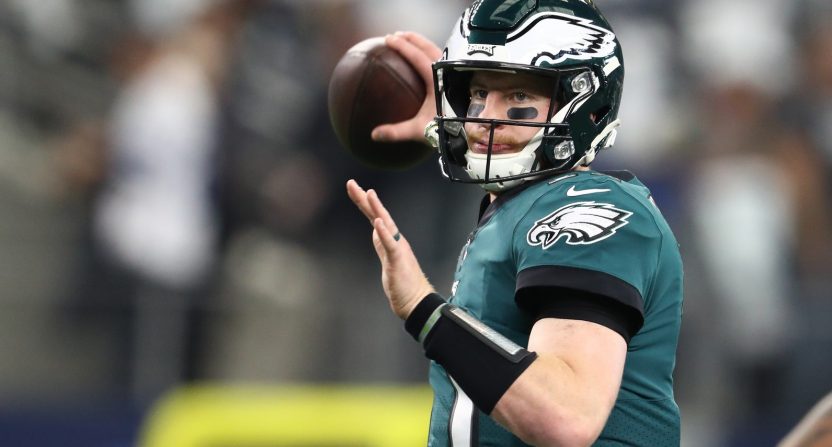 Over the past two seasons, the Philadelphia Eagles have seen the highs and lows of their franchise quarterback, Carson Wentz. Wentz played like a legitimate MVP candidate for the majority of the 2017 season before seeing his season cut short due to injury. Following the injury, Nick Foles rode in and guided the Eagles to the first Super Bowl championship in franchise history. After returning to the field in 2018, Wentz was never quite himself and he struggled in what was a disappointing regular season for the defending Super Bowl champs.

A story published Monday by Philly Voice suggests Wentz was difficult to work with behind closed doors, unwilling to adjust his game and run the offense the way Foles has. The story is based on anonymous quotes from within the Eagles locker room, with one anonymous source supposedly saying Wentz is more egotistical than he portrays in the public.

“Carson Wentz’s biggest enemy is Carson Wentz,” one source said. “He’s had his ass kissed his whole life, and sometimes acts like he’s won 10 Super Bowls, when he hasn’t played in, let alone won, a playoff game yet. Everyone around him wants good things for him. He did more thinking on the field than he did playing (in 2018). You don’t have to be a brain surgeon or a football expert to see how differently this team plays and reacts with one guy as opposed to the other.”

On the surface, there appears to be some truth behind this anonymous quote. There were a number of times during the 2018 season that Wentz potentially held on to the ball too long to make a big play when he could have scaled back and attempted a higher-percentage play for a lesser gain. This has been a key to the offense with Foles the past two postseasons. Maybe Wentz did try to do too much once he got back on the field. Psychologically, can you blame him? He did sit on the sideline supporting Foles while his backup led the team to the first NFL championship for the franchise since 1960, but everybody knows Wentz is the franchise quarterback.

Maybe he put too much pressure on himself in his third season, and maybe that led to some poor decision making. Some of the perceived regression was explained away by changes to the coaching staff, most notably Frank Reich leaving his role as offensive coordinator to become the head coach of the Indianapolis Colts and quarterbacks coach John DeFilippo leaving to become the offensive coordinator with the Minnesota Vikings. However, the focus of the story appeared to emphasize an unwillingness for Wentz to adjust his game and playing favorites with receivers.

According to the story, Wentz is placing himself above the team, causing a certain friction that can lead to a team melting down from the inside.

“He has to return to who ‘Carson Wentz’ is,” a source told PhillyVoice. “That comes with relaxing and not forcing things. It also comes with being able to take constructive criticism. He has to learn that it’s not always about him and that’s partly what hurt this team this year. We know what type of player he can be, and who he normally is. He needs to realize it’s the Philadelphia Eagles not the Philadelphia Carsons.”

There’s just one problem with this report: it has been shut down by a number of Eagles players, including team leaders Fletcher Cox and Lane Johnson, and backup quarterback Nate Sudfeld, who happened to be in every meeting Wentz would have been in this season.

Reading through this Carson Wentz thing and as a leader on this team none of that is true Carson is a great teammate and great player we are all behind him 100% he’s our guy and will come back and prove the world wrong. If you got a problem feel free to @ me I’ll respond

Don’t believe everything you read!!! Carson has been nothing but a GREAT person, GREAT teammate and GREAT leader since Day 1. Our locker room stands behind him all the way. We can’t wait to get back to work and be the best team we can be in 2019! #FlyEaglesFly

Whoever wrote that article needs to check their "sources". #fakenews

Carson has been and is our leader and our QB. Y'all know where to find me if you have any issues.#flyeaglesfly

This report was also compiled by a reporter who is not on the regular Eagles beat. Joseph Santoliquito has been in the Philly sports media for years, covering a wide range of topics, but having regular daily access to the Eagles before and after games and practices is not typically one of them. This report didn’t even come from the one main Eagles writer employed by Philly Voice. That doesn’t mean Santoliquito doesn’t have his sources, or that his quotes are illegitimate, but it does bring a certain level of skepticism that some key Eagles players have been quick to show on Twitter in defense of Wentz. There could very well be someone inside the Eagles organization who views Wentz in this way, but there doesn’t appear to be a Donovan McNabb-Terrell Owens issue going on with this team at this point.

Not yet, at least.

One thing is certain: the Eagles do need Wentz to get back to full strength and be ready to improve in 2019. He is the franchise quarterback and has a high ceiling that he still hasn’t reached yet. And yes, he could benefit from taking some lessons from what Foles has done. If the Eagles are able to win a few games with Wentz under center next season, this particular story will be far in the rear view mirror.