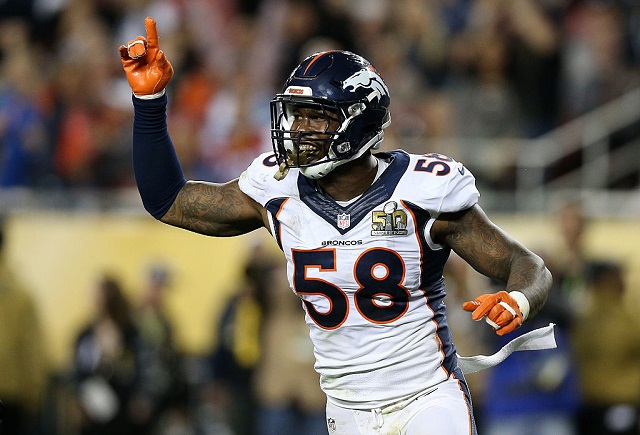 While six years, $114.5 million looks like a massive offer on the surface, it’s actually misleading due to the guaranteed money involved, as Yahoo! Sports’ Charles Robinson explains:

In reality, the contract can be dumped after only two seasons, meaning the Broncos have offered Miller what amounts to be a two-year deal worth $38.5 million guaranteed. Another $1.3 million in unguaranteed money is earnable between those two seasons via a workout bonus.

Well, apparently things have only gotten worse since these talks, and Robinson reports that Miller “could sit out the 2016 season entirely”:

The guaranteed money is apparently where everything fell apart between the two sides. And it appears to have gotten much worse since, to the point that there is now a possibility that Miller could sit out the 2016 season entirely.

Robinson says that the Broncos and Miller actually agreed on the six years and $114.5 million, but were far apart on the $39.8 million figure for guaranteed money. For context, the Miami Dolphins’ Ndamukong Suh got about $60 million in guaranteed money last offseason, and Olivier Vernon just got $52 million in guarantees from the New York Giants this offseason. Miller is arguably — if not Khalil Mack — the best edge rusher in the NFL, coming off a Super Bowl MVP, and is still just 27 years old. While Suh and Vernon are terrific players themselves, Miller is in another class, and deserves more guaranteed money than those players.

Denver slapped the franchise tag on Miller in March, but Robinson explains how it’s still possible for Miller to not be on the Broncos in 2016:

Miller could report and play (likely unhappily) under the franchise tag, facing as many as three straight seasons of tags before forcing his way to free agency. Or he could take the current impasse as something that can’t be overcome and ask for the tag to be rescinded, resolving the situation in a fashion similar to Norman and the Panthers. He could also sit out the upcoming season, forcing the Broncos to apply a non-exclusive franchise tag next offseason. In that latter route, Miller could then negotiate and sign with other NFL teams, with the Broncos being awarded a first- and third-round pick if they choose not to match the offer.

Miller knows he would get — at least near — his desired contract from some team if not the Broncos, with premiere edge rushers valued right behind quarterbacks in today’s NFL. Everyone saw what Miller did to Cam Newton and the Carolina Panthers in the Super Bowl, and how impactful Miller was for that entire playoff run.

Additionally, Miller’s only 27, and already has a Super Bowl MVP under his belt, so he may be willing to sit out a season more than your average NFL player would be. It still seems quite unlikely, but at least possible at the same time, and it will be interesting to see what happens between Miller and the Broncos over the next few months.