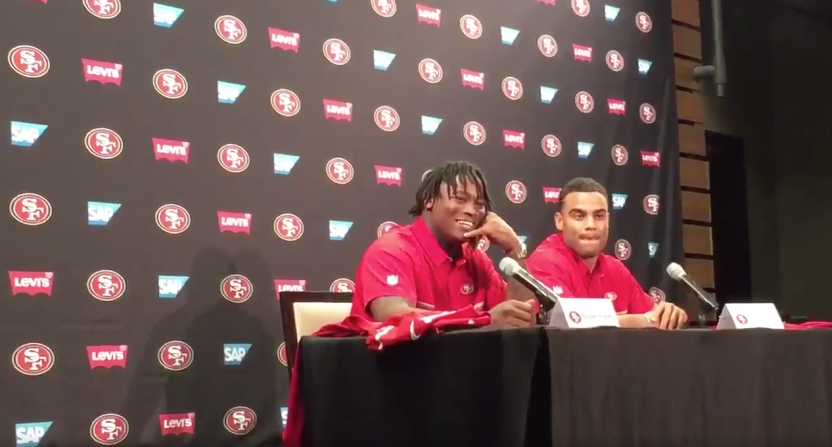 The 49ers traded up from the 34th pick to the 31st in Thursday night’s NFL Draft to select linebacker Reuben Foster. And it’s a damn good thing they did because the Saints were all set to select Foster at No. 32.

Foster, a two-year starter at Alabama who was already on the phone with the New Orleans Saints when San Francisco was on the clock. Then the 49ers called to let him know they had just taken him off the board, and he had the Saints in one ear and the 49ers in the other.

Here’s how Foster told the story at his introductory press conference Friday:

Reuben Foster was on phone with #Saints (32nd pick) when #49ers called to say he was theirs at 31. Here he tells how story goes: pic.twitter.com/RW1SaREUa0

The Saints wanted to speak to Foster’s girlfriend, who is from the New Orleans area. While she was still speaking to them, the 49ers called, and he picked up on the other line.

“I told coach John Lynch that it was too late,” Foster said. “I said, ‘Man, coach, you’re the 34th pick. It’s too late. The New Orleans Saints about to get me.”

Foster said he really wanted to be a 49er, so finding out San Francisco traded up to the 31st pick must have been a nice surprise.

A reporter then asked if it was awkward when he resumed talking to the Saints on the other line.

If Foster blossoms into a defensive star, this will sting Saints fans for a long time.