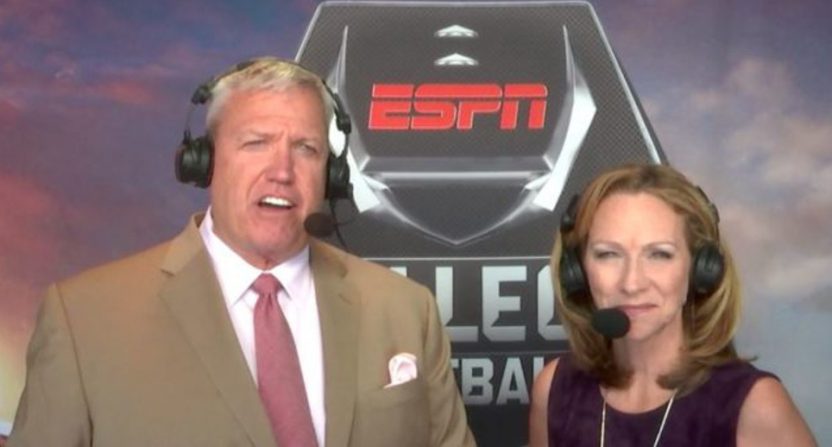 It’s not uncommon to see NFL analysts leave for positions with teams, from Mike Mayock to John Lynch to Jon Gruden, and the latest to follow there might be ESPN studio analyst Rex Ryan. On Tuesday, ESPN NFL reporter Adam Schefter floated Ryan as a “name to watch” in the Kansas City Chiefs’ search for a new defensive coordinator following their firing of Bob Sutton after their AFC championship game loss Sunday. Here’s Schefter’s tweet on that front:

Here’s a name to watch for the now vacant Chiefs’ DC job, per sources: former Jets and Bills’ HC and current ESPN analyst Rex Ryan, who has been approached about other DC openings in recent seasons.

Of course, this is anything but a done deal at this point. Schefter doesn’t say the Chiefs are interested in Ryan or that Ryan is interested in the Chiefs, just that he’s a “name to watch” (and for the record, this came seven minutes after Schefter tweeted about Sutton’s firing, so the intent seemed to be just mentioning one possible candidate to fill that new vacancy). And when asked about defensive coordinator coaching vacancies last year, Ryan told The New York Post‘s Justin Terranova that he wasn’t keen on leaving TV:

“I am never going to say I wouldn’t. I am not going to paint myself in a corner and say I absolutely would not do that, but at this time I am going to say I don’t think so. That may drastically change, but right now I don’t see that.”

So this may all amount to nothing. But there are some factors that make it worth perhaps considering. For one thing, it’s seeming pretty unlikely that Ryan will get another shot as a NFL head coach at the moment; his 61-66 regular-season record there isn’t exactly that inspiring, and he’s 56 and comes from a defensive background, two things that run against the recent trends in head coaching hires. So if he does want to return to the sidelines, a DC job may be his best bet, and it may be to his advantage to take one sooner rather than later, before he’s seen as completely too old.

And given the Chiefs’ high-powered offense and how close they came to a Super Bowl, there’s some pressure on them to make a splashy DC hire, and Ryan might fit that bill. Oh, and Ryan’s often been criticized for his TV work; while there’s no current indication ESPN plans to move on from him, they do change their NFL analysts frequently, and Ryan seems far from untouchable. So it’s not that he’s necessarily leaving a job that’s secure for life.

Whether Ryan’s blitz-heavy schemes would work in today’s NFL is a valid question, as is how he’d handle working under Chiefs’ head coach Andy Reid. But he did find significant success as a NFL DC, especially with the Baltimore Ravens from 2005-08. And he has received interest from teams in the past, and it’s unlikely that Schefter would throw this out there if he didn’t actually think Ryan was a plausible candidate. And Schefter cited this as from sources, so that adds some further credibility to it. So we’ll see if this goes anywhere. But there’s at least a chance that Ryan might be on the sidelines instead of in a TV studio next year.