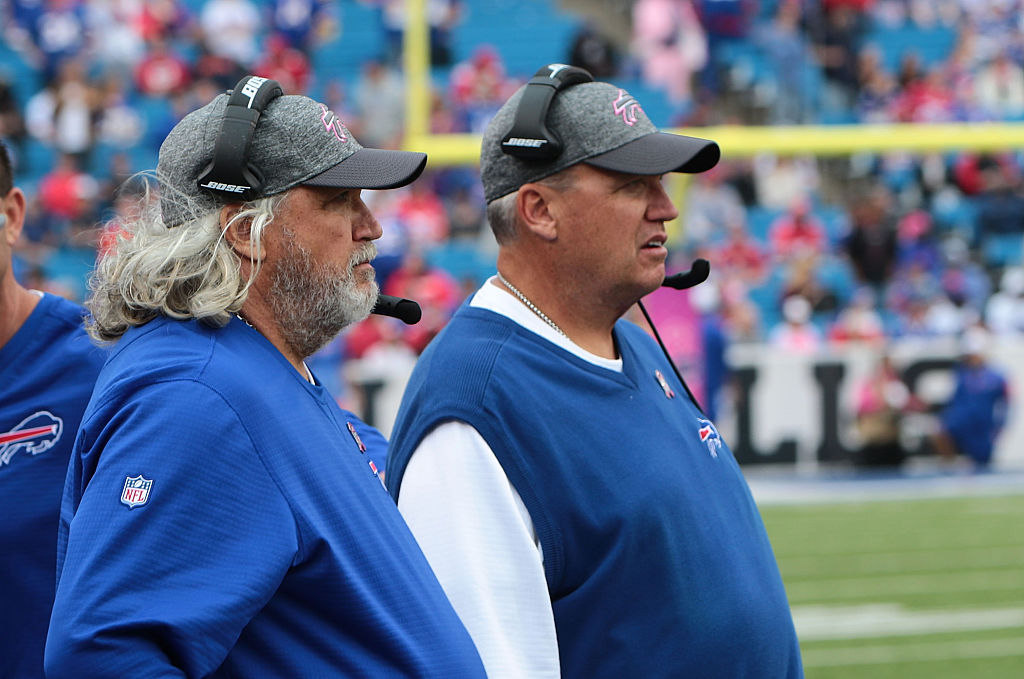 On January 12th, 2015, the Buffalo Bills signed head coach Rex Ryan to a five-year, $27.5 million dollar contract. 715 days later, less than two years after hiring him, the Bills have announced the firing of Rex and his brother Rob, one of his assistants.

Rex Ryan has been relieved of his duties as head coach. Anthony Lynn will serve as interim head coach. pic.twitter.com/8Vf0fxqwcl

In his first year with the Bills in 2015, Ryan went 8-8 and Buffalo finished third in the AFC East. In 2016, the Bills are currently 7-8 and will face the New York Jets in their season finale on Sunday.

Despite a very winnable final game of the 2016 season and the chance to go 8-8 in back-to-back seasons, Buffalo decided the short reign of Ryan needed to come to a close. Unsurprisingly, Bills fans are thrilled.

It's about time! @buffalobills

@buffalobills late Christmas present, can we please end up with a competent head coach for once

Not only did Rex get fired, but his twin brother and assistant head coach Rob was fired as well.

Ryan won’t be missed much in Buffalo. His replacement Anthony Lynn, 48, was the Bills’ offensive coordinator this year before he was tabbed as interim head coach. From 2009-2014, Lynn served under Ryan with the Jets as running backs coach.

Lynn also becomes the 9th Bills’ interim or full time head coach since 2000, which is stunning when compared to the rest of the AFC East.

While this move is a little surprising to happen now because of the Bills’ easy Week 17 matchup with the Jets, it’s also unsurprising after a 34-31 overtime loss to the Miami Dolphins in the home finale during Week 16.

In his weekly This Week in NFL Stupid, column Tuesday, our own Brad Gagnon chronicled Ryan’s stupid moves against the Dolphins.

“As we established last week, freezing the kicker doesn’t generally work — especially on long field goals. Kansas City Chiefs coach Andy Reid cost his team an important Week 15 game by doing so. And yet there was Ryan, trying to call a timeout before Andrew Franks of the Miami Dolphins attempted a 55-yard field goal with Buffalo leading by three in the final seconds of the fourth quarter.

Ironically, this freeze actually might have worked despite the odds, because Franks made the kick — the longest field goal of his career. It was an incredible kick in cold weather, and it wasn’t likely to be duplicated on a second effort.

Rex Ryan says he wanted a timeout, but he was clearly late https://t.co/35hessaHct pic.twitter.com/aOD3REEcoA

In addition to having a new head coach against New York during the final game of the season, Buffalo will also be sitting its starting quarterback Tyrod Taylor to protect him against an injury, which would guarantee the rest of his contract.

‪”Bills are planning to bench QB Tyrod Taylor vs Jets on Sunday to start EJ Manuel, per league sources. This is a business decision so the Bills are not at risk for the $30.75 million left on his contract that would become guaranteed if Taylor suffered a significant injury. A week after the Titans lost Marcus Mariota and the Raiders lost Derek Carr, the Bills are not planning to take any chances with Taylor; thus EJ Manuel is now expected to start the regular-season finale against the Jets.‬”

So, what’s next for Buffalo? That’s anyone’s best guess. Here’s hoping they don’t go with another retread as head coach.