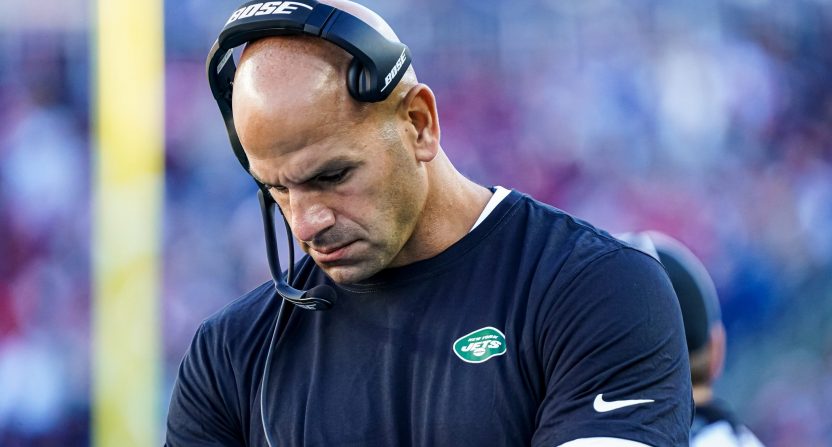 The recent history of the New York Jets is pretty bleak. Then again, so is most of the franchise history.

Aside from their Super Bowl III victory, the best stretch in franchise history came between 2001 and 2010, culminating in Rex Ryan’s first two seasons as head coach when they made it to the AFC Championship Game in back-to-back seasons.

The franchise hasn’t made the playoffs since then and hasn’t had a winning season since 2015. So we suppose that if anyone has the right to comment on how the Jets are doing, it’s Ryan (though admittedly, he’s not one to talk about failed coaching performances). And he certainly made his feelings known on Monday’s edition of ESPN’s Get Up, in which he torched the current coach staff following their 54-13 loss to New England

“Worst coaching performance I’ve seen in years,” Ryan said. “I mean, how in the hell can you be coming off a bye and give up 54 points to the Patriots? We always laugh about how I gave up all the — no. I would have had to play them twice, with Tom Brady on the other sideline. So, to me, this was a joke. You had a rookie quarterback on the other sideline, torched you. By the way, do you understand what a screen pass is? I don’t know if you do, New York Jets, because you certainly couldn’t defend them. It makes the quarterback look like, ‘Hey, what a wasted pick he is.’ Give me a break. Give me a break. He’s got no chance right there.”

Head coach Robert Saleh is in his first season leading the franchise and it’s not going very well. The Jets are 1-5 and have the worst offense in the NFL. Saleh is the third Jets coach in four years and, quite frankly, he might not last much longer than his predecessor if he can’t turn things around fast. Easier said than done when it comes to leading the New York Jets.
[The Spun]