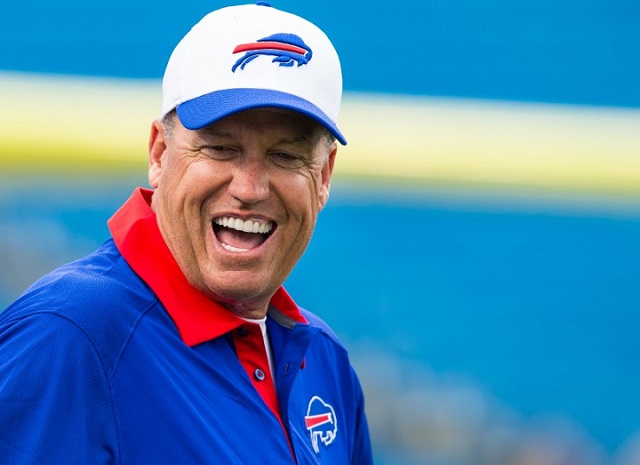 Finishing with an 8-8 record, a third-place standing in the AFC East and no playoff bid surely isn’t the outcome Rex Ryan and the Buffalo Bills envisioned for their first season together.

But Ryan might have taken some solace from depriving his former team of a playoff bid on Sunday. The Jets went into Sunday’s regular season finale against the Bills on a five-game winning streak, and they needed one more victory to qualify for the playoffs after a four-year absence. Beating their old coach to get into the postseason and demonstrating success without him surely would have made that win even sweeter.

(OK, a Steelers loss could also have pushed the Jets into the playoffs, but that’s not nearly as fun a story. Plus, Pittsburgh beat the Browns, 28-12, to make that a moot point.)

Unfortunately, Jets quarterback Ryan Fitzpatrick threw three interceptions — all in the fourth quarter — resulting in a 22-17 loss to the Bills and a fifth straight season out of the playoffs. Given how close they were, missing the postseason had to be particularly painful. But the sting was likely even more pronounced by losing to Ryan’s new team. And deep down, you have to think Ryan felt good about exacting a little bit of revenge on the franchise that fired him a year ago.

Considering the Bills had nothing to play for, other than pride and avoiding a losing record, beating the Jets was rather impressive. Many teams would likely have checked out for the season, occupied more with offseason plans than playing the next game. But the Bills apparently wanted to win one for their coach and stick it to a division rival in the process.

Of course, it could also just be that Buffalo’s best players simply performed better than the Jets’ headline talents, especially in the fourth quarter. Receiver Sammy Watkins had an excellent game — catching 11 passes for 136 yards — against Darrelle Revis, generally considered one of the best cornerbacks in the league. Revis didn’t talk to the media afterwards. And a Bills defense that was previously outspoken about Ryan’s schemes not suiting the personnel made impact plays when the game was on the line.

Ryan has always been good for a quote and unafraid to speak his mind with the press, so you might have guessed he would gloat a bit about costing his old team a spot in the playoffs. But maybe because he was relegated to playing spoiler, finishing behind the Jets in the division and missing out on the postseason, Ryan was a bit more humble than expected.

“I feel great, there’s no question,” Ryan told reporters after the game, including the New York Post‘s Mark Cannizzaro. “I was very honest about how I felt going into this game, that I’ve got a lot of friends over there [with the Jets]. I want them to be successful, but not at my expense.”

But part of the reason Ryan may not have been relishing his vengeance was because he already went through the emotions of returning to MetLife Stadium with his new team on Nov. 12 and getting the win. (Interestingly, the Bills won by that exact same 22-17 score.) He made a point to avoid former players and skip pregame warm-ups out on the field, apparently hoping to be less of a story than the game itself.

But that was never going to happen. Not with media, and especially the New York press corps, always looking for a good storyline. And Ryan provided a tasty one with the Bills victory on Sunday. Defeating the players he used to coach, the owner who formerly employed him, costing them a chance to succeed where he failed the previous four seasons, all had to be pretty sweet.

Yet Ryan wouldn’t take that bait after the game. Again, that’s probably because his first year in Buffalo wasn’t much to brag about. Even if Ryan got one victory that he’ll likely savor more than he let on publicly, he and his staff know there is plenty of improvement to make for next year — notably fixing the defense that’s supposed to be his specialty. Moral victories aren’t going to be enough next season. The Bills will have to earn their own merits, not derive satisfaction from another team’s failure.

If and when that happens, then maybe we’ll see the Rex Ryan that we’ve come to know and love (or despise, depending on your view of him). The NFL is a lot more fun when some coaches show some personality. No one wins when Ryan has to be humble.