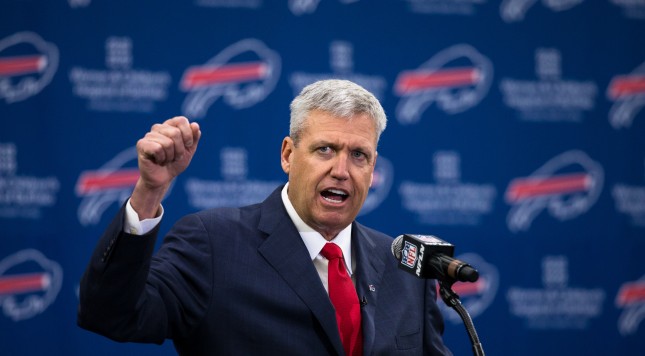 Rex Ryan is a good, but not great, coach. That is not a hot take. Ryan’s overall regular season record is 61-66, just below .500. On top of that, his near .500 record has come while coaching the New York Jets and Buffalo Bills.

During his time with the Jets and Bills, Ryan has never had the best players in the league, but he’s managed to do at least okay without anything resembling a franchise quarterback.

Ryan’s Jets went 4-12 his last season there, but that was only a year after going 8-8 and finishing second in the AFC East. In 2016, Ryan’s Buffalo Bills were 7-8 with a week left in the season when he was fired. If Ryan was kept for Week 17 and won, the head coach would’ve gone 8-8 in his only two years in Western New York.

But sadly, instead, Ryan claims he got f–ked.

“The one thing about (being on TV) is that you don’t lose,” Ryan said. “You’ll remember every damn loss. But the wins? You don’t necessarily remember. So, it takes a lot out of you. I’m tired of getting f—ked. Unless it’s a real situation, there’s no sense of getting into it again.”

Ryan was fired by the Bills just two years into a big five-year contract. Just a couple months after his firing, Ryan will be covering the Super Bowl as an analyst for ESPN instead of watching it as a head coach hoping to bring the Bills there next year.

“I set the expectations too high,” Ryan told the Daily News Monday night. “Like, boy, that’s a shock. In a way, I felt, why not us? I stepped in where the head coach had quit, the defensive coordinator quit and the quarterback quit on them. So, I thought that it was important at the time to say, ‘You know what? Shoot, I believe in you. And I’m proud to be the coach here.’ Every bit of that was true. I put that truck (with the Bills logo) around town. I was all-in. Even though those other three had quit, I wasn’t a quitter. I was ready. And I wanted to be there. And I wanted to win. And I thought I could win.”

Maybe Ryan did set the expectations too high, but maybe the Bills did too. Going 8-8 one year and 7-8 the next under Ryan isn’t necessarily that bad, especially when you have to play the New England Patriots twice a year.

However, to Buffalo’s ownership, it was bad enough to constitutedRyan’s firing.

“… Let me tell you, I stripped that damn truck the day I got fired,” Ryan added with a laugh. “F–k you guys.”

Then again, Buffalo is hungry for a playoff appearance. The Bills haven’t made the postseason in 17 years.

Ryan did tell the Daily News he enjoyed his time in Buffalo, but as he’s quoted above, he doesn’t wish the Bills luck while he will wish the Jets luck.

Overall, Ryan’s first substantial one-on-one interview after his firing was full of interesting quotes and statements about where he plans on going from here. The one thing that sticks out is that while Ryan isn’t committing to coaching again, he also isn’t closing the door either.

“I wanted to put myself in a situation where I thought I could be successful and where I’d have support. Because I think that’s all I need. That’s going to be debated and questioned. They’ll say I’m a .500 coach,” Ryan said. “Hopefully if I get back into it one day, I’ll be able to do it. Sometimes you can’t accomplish all your goals in life. I like competing against the very best. There’s no doubt about it. Unfortunately, I was never good enough to win it all… you know, so far.”