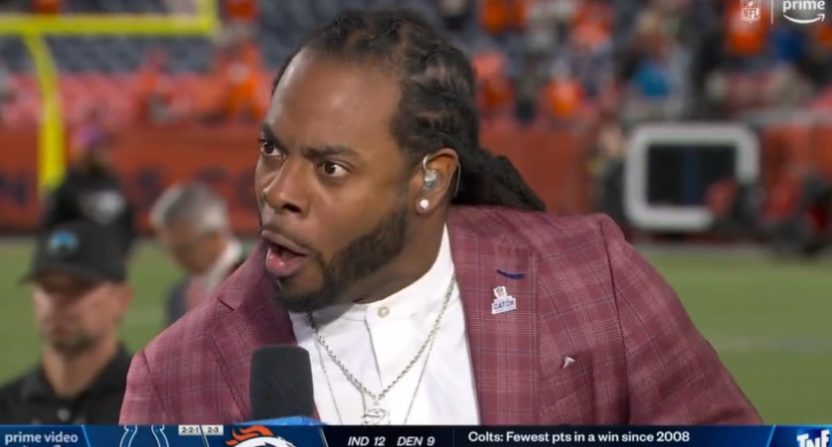 The Indianapolis Colts stunned the Denver Broncos 12-9 in overtime, in a hard-to-watch Thursday Night Football game.

Leading 9-6, Denver had 3rd-and-4 at the Indianapolis 9-yard line with 2:19 remaining. In a game with field goals accounting for literally every score, going up six points would’ve felt like a very safe lead, especially with such little time remaining (the Colts were also out of timeouts).

However, the Broncos chose to pass the ball (for the fourth time on the drive), and quarterback Russell Wilson was intercepted by former NFL Defensive Player of the Year Stephon Gilmore in the end zone. This was Wilson’s second interception of the game and the second in the fourth quarter (and the second in scoring position).

The Broncos are trying to put the game away… and instead it's another Russell Wilson interception. Brutal!

(And it summarizes this game) 🏈 #TNF pic.twitter.com/SOA4CisjzV

Sherman was a member of the Seattle Seahawks team that lost 28-24 to the New England Patriots in Super Bowl XLIX. Trailing by that score, Seattle had 2nd-and-goal at the 1-yard line with 27 seconds remaining, when Wilson was intercepted by New England’s Malcolm Butler. Seattle needed just one yard with three downs to work with (and one timeout), and chose to not just give the ball to star running back Marshawn Lynch.

The Colts took advantage of the opportunity, with Matt Ryan — who also had an otherwise very rough night — leading a drive that resulted in a game-tying 31-yard field goal from Chase McLaughlin.

Fast-forward to overtime, with the Colts leading 12-9 after another McLaughlin field goal. Wilson and the Broncos had a good drive going, but the Indianapolis defense tightened things up in the red zone.

The Broncos were left with 4th-and-1 at the Indianapolis 5-yard line with 2:39 remaining in overtime. Rookie head coach Nathaniel Hackett opted to go for the win instead of the game-tying field goal; a field goal would’ve almost certainly resulted in the game being tied in a best-case scenario for Denver with such little time remaining.

Well, Hackett and the Broncos went with a pass play on 4th-and-1, and Wilson’s throw was incomplete, giving the Colts a 12-9 victory.

Sherman is now an analyst for Amazon’s Thursday Night Football coverage, and during the postgame show, he didn’t hold back in sharing his feelings on Denver’s decision to throw the ball in these spots. He again admitted to having “flashbacks,” and said how he wishes “had Marshawn [Lynch] up here.”

“You gotta run the ball. I wish I had Marshawn up here. One yard. You need one yard. Run the ball. Run the ball! All he has to do is run the football. Necessary criticism. You know, I’ve said enough criticism for him. But god dangit, run the dang ball! Learn from your mistakes! Run the ball!”

Richard Sherman has seen this before! pic.twitter.com/utW5OeU8xw

That’s some genuine emotion and frustration- and great television.

Now, it’s worth pointing out that the Broncos did run the ball on first, second, and third down on the final drive. Additionally, Denver running back Melvin Gordon was stuffed on 3rd-and-2. And, while it’s very hard to defend Hackett about *anything* right now, it’s understandable that he’d want to put the game in the hands of a quarterback that the organization signed to a $245 million contract (to go with making a blockbuster trade to acquire him).

While that decision was understandable, the execution of the play was terrible.

Wilson had just a 54.9 passer rating in the loss, and the Broncos fall to 2-3 with him at quarterback.