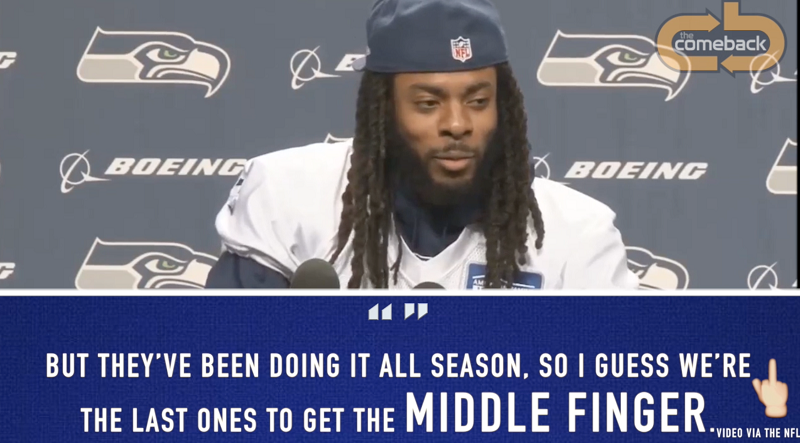 On Tuesday, Richard Sherman talked about why he hated Thursday Night Football so much with reporters. On Wednesday, he wrote down those same thoughts and expanded on them for the world to read.

Tomorrow on Thursday Night Football, Sherman and the Seattle Seahawks will face off against the Los Angeles Rams in what Sherman once called a “poopfest,” even though he thinks that might’ve taken it too far.

“O.K., maybe it wasn’t the most eloquent way to describe it, but I call it like I see it. I mean, you gotta call a spade a spade,” Sherman wrote for The Players’ Tribune.

The main point that Sherman makes in his piece is the fact that TNF is not good for a player’s health and safety.

As Sherman puts it, the NFL always talks about player safety and how important it is. The league then tries to “do everything in its power” to ensure the players’ health and safety. That’s where Sherman drops his first hammer:

“But when it comes down to it, it’s not the players that the NFL protects… It’s the Shield,” Sherman said.

From there, Sherman describes his typical week when he plays on back-to-back Sundays.

So when a player is forced to speed that seven day process up by three, it’s not easy and kind of ridiculous as Sherman points out:

Sunday
Game day. This is what you live for.

Monday
You feel like crap, but you still go to work.

Tuesday
“Wait … Where did my off day go?” The NFL took it. Tuesday becomes Wednesday. That means you’re in shoulder pads and helmets. If you want to soak in the cold tub or the hot tub, or to get some of the scar tissue worked out, better get it in on Monday — or squeeze it into an already full day on Tuesday or Wednesday.

Thursday
Game day. This is what you live for. But this time, your body isn’t ready. You’re still sore from Sunday’s game. You’re going to go out there and compete and give everything you have, because that’s what you do. But your body just won’t have as much to give as it would have had on a full week’s rest.

That’s why the quality of play has been so poor on Thursday nights this season. We’ve seen blowouts, sloppy play and games that have been almost unwatchable — and it’s not the players’ faults. Their bodies just aren’t ready to play.

Sherman doesn’t stop there either. He goes right for the jugular when talking about an injury to a major player that happened during Thursday Night Football.

“And it’s funny … you know those TNF commercials the NFL has been running? The Anything Can Happen commercials highlighting all the great historical things that have occurred on a Thursday?

Well, you know what else happened on a Thursday?

He reinjured his back and had to have surgery, and he was put on IR.”

By the way here is an example of an “Anything Can Happen” commercial:

Along with player safety, Sherman talks about another big reason for the NFL doing this being money throughout the entire piece. He ends the article with a knockout blow that mentions both points.

But as long as the NFL is using that same finger to count Thursday Night Football dollars, I don’t think it really cares.”

Yeah… Sherman really doesn’t like Thursday Night Football and is probably more than okay with a fine for these public comments.