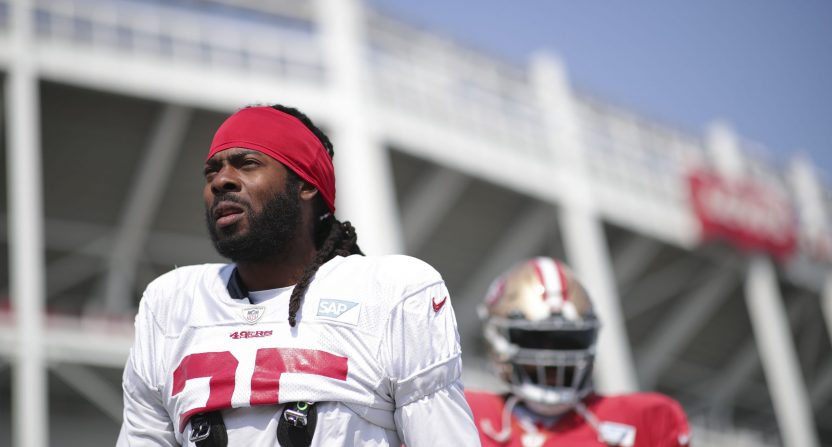 There has been a lot of speculation the last couple of weeks about where free agent corner Richard Sherman might sign this NFL season. He certainly received a lot of interest but in the end, Sherman went to the team that likely gives him the best chance to win another Super Bowl.

Sherman announced Wednesday morning on the debut episode of his podcast that he had signed with the Tampa Bay Buccaneers.

All the details in episode 1 of the Richard Sherman podcast here: https://t.co/NIWBpAyZEL

Sherman said that he even got pitched by Tampa quarterback Tom Brady, which played a role in his decision-making.

“This was an opportunity I couldn’t pass up,” Sherman said. “I weighed all the options with my wife and my family and this is what we came up with. So I’m ready to strap them back up and go out there and show these old legs still got some juice.”

Bruce Arians admitted that the Bucs were reaching out to Sherman last week as they looked to shore up their defensive backfield. Sherman said that he also received interest with the San Francisco 49ers (whom he played for last year), the Carolina Panthers (who just traded for C.J. Henderson), and the Seattle Seahawks.

The 33-year-old Sherman brings a ton of experience with him to a very young backfield. The five-time Pro Bowl and All-Pro corner will provide strong tackling ability, something that has been lacking in that department for the Bucs’ secondary.

However, Sherman is also dealing with some legal issues off the field that need to be sorted. An arrest in July led to him being charged with five misdemeanors, including two counts of domestic violence. He has pled not guilty and apologized for the incident. Before that in February, King County obtained an “extreme risk protection order” for Sherman, which bars him from owning guns after it was deemed he posed a danger to himself and others.

Sherman said last week that he felt like his play on the field should mean more than a “momentary lapse in judgment.”

ESPN’s Ed Werder reported on Tuesday that Sherman believes he needs a week or two to be ready to play in a game, so it’s highly unlikely he’ll be in uniform when the Bucs take on the New England Patriots this Sunday. However, he is already back at practice so who knows…

Richard Sherman is practicing with the Bucs today (he only needed one COVID test since he's vaccinated) and he's wearing No. 5. I was told they'll follow his lead on his readiness. pic.twitter.com/do9IcX7esP

However things turn out in Tampa this season, the reactions to Sherman signing with the Bucs are already rolling in, ranging from excitement over what he can do on the field to concern over what happened off the field.

"Richard Sherman chose the Bucs over every team because Tom Brady called him. I believe it's like Carmelo said about he and LeBron; 'we win now with our heads more than our bodies.' Richard is high IQ & experience." pic.twitter.com/U1H86qWhpm

So, are we really going to skip over the very serious and disturbing stuff that happened with Richard Sherman this summer and go right to “WOW! Sherman to the Bucs?!?!?!?”

The Bucs feel like they've done their due diligence on Richard Sherman's off-field issues. He is undergoing counseling. They believe he has the necessary support systems in place and they believe in the strength of their locker room to help him along if needed, like Antonio Brown