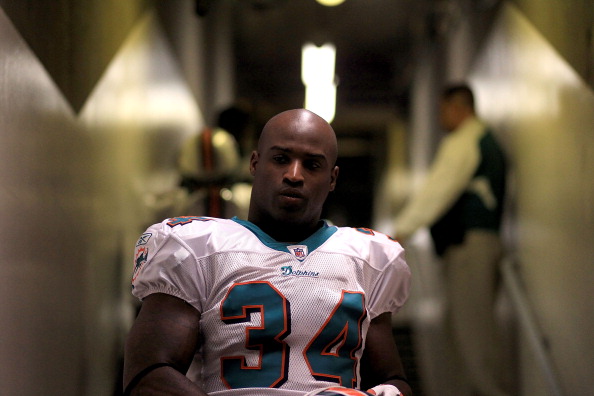 Ricky Williams was once one the NFL’s top running backs, a workhorse for the Saints and Dolphins who led the league in rushing yards in 2002 on the way to a first-team All-Pro selection. But Williams is arguably better-remembered for loving marijuana more than perhaps any NFL player before of since.

Williams failed four drug tests during the first six years of his NFL career and was suspended for the entire 2006 season, during which he played in the CFL for the Toronto Argonauts. The running back never expressed much remorse for his pot use, and in a 2010 ESPN 30 for 30 documentary, he extolled the virtues of the drug.

In his post-football life, Williams has become somewhat of a pot advocate, and recently spoke at the High Times SoCal Medical Cannabis Cup on a panel called “How Cannabis Will Save The NFL.”

Via Yahoo! Sports, here’s what he had to say:

“I played a position where I got beat up a lot. A couple years I led the NFL in carries, and somehow I was able to recover through the week and come back out there and take another pounding. … “The teams don’t care, you know, they weren’t trying to take care of me. So, I had to take care of myself. And one of the ways I took care of myself was using cannabis.

“I’d go see the doctor, he’d wiggle my knee around and give me some anti-inflammatories, some pain pills, and just try to rest,” Williams said. “That’s it. I think there’s a better way.”

There exist many compelling arguments for legalizing or least tacitly accepting marijuana in the NFL, many of them based around the idea that weed can replace addictive painkillers as the go-to treatment for pain and soreness.

At Yahoo! Canada, The Comeback’s own Andrew Bucholtz succinctly summarizes the movement to de-stigmatize marijuana in the NFL.

The idea that marijuana may be more effective than painkillers in treating football players is not limited just to Williams. Patrick Hruby has written several good pieces on medical marijuana’s usage among athletes for Sports on Earth and The Atlantic, and the NFL has considered softening its policies. Even the current policies can be avoided thanks to the league’s highly-scheduled tests: former NFL RB Jamal Anderson told Bleacher Report’s Mike Freeman in 2015 that an estimated 60 per cent of NFL players smoke marijuana. Former Chicago Bears’ quarterback Jim McMahon told The Chicago Tribune’s Robert McCoppin last week that medical marijuana allowed him to break his painkiller addiction. Other former NFLers like Nate Jackson and Kyle Turley are currently lobbying for marijuana to replace painkillers, given that an estimated 70 to 90 per cent of NFL players who used painkillers during their playing career went on abuse them, and Jackson told Pain News Network editor Pat Anson this week he credits marijuana with preserving his brain.

Whether or not the NFL starts encouraging its players to smoke weed every day, the league should at least scale back its punishments for using the drug. There’s no reason Williams and, more recently, Josh Gordon should be sidelined a full season for an “offense” that is entirely legal in four U.S. states.

As the country as a whole begins to recognize the reality of marijuana’s harm and lack thereof, the NFL should too. And if Williams’ experience means anything, loosening up on punishments for weed might even be a net positive for the league.