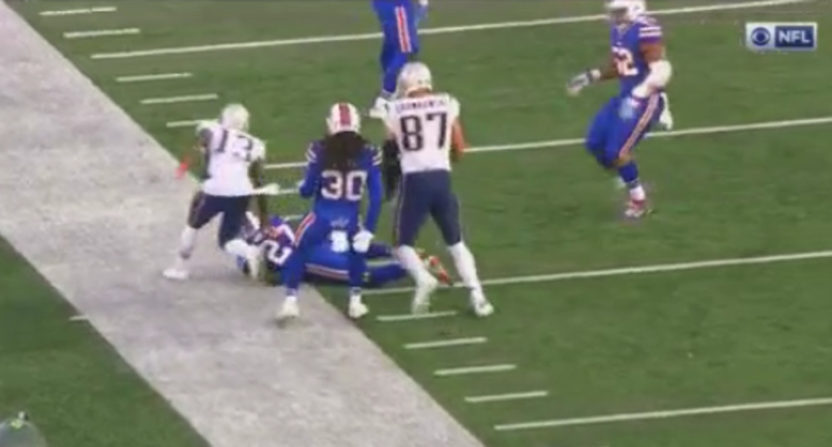 Receivers getting upset about calls not going in their favor is relatively common, but it’s rarer to see one of those receivers follow that up with a concussion-causing bodyslam of an on-the-ground player, or to try and defend that by saying they were frustrated. That’s what New England Patriots’ tight end Rob Gronkowski did in Sunday’s 23-3 win over the Buffalo Bills, though. After Bills’ defensive back Tre’Davious White made an interception in coverage against Gronkowski and went to the ground, Gronkowski came running in after the whistle and took a flying leap onto White:

this is disgusting from gronk pic.twitter.com/jd6x17lkiO

Late hit by Gronk after Tre’ White INT when he was down and out of bounds. Dirty. #Bills

White was removed from the game and put in the concussion protocol. And that really speaks to the problem with this; this isn’t just Gronkowski acting out, but him doing so in a way that directly endangered another player. Many, including Concussion Legacy Foundation executive director Chris Nowinski, pointed out how troubling Gronkowski’s actions were:

Gronk's cheap shot gave Tre'Davious White a #concussion. If he's not suspended, it signals cheap shots are fair game now in NFL. Had it been Tom Brady's knee, player would be banned for life. Just because you can't see his injured brain doesn't mean it's not as serious. https://t.co/v4eqZ7j3n7

Gronkowski’s cheap shot resulted in a concussion for Tre’Davious White…the NFL better make sure they deal with this appropriately or they’ve lost all credibility when it comes to protecting their players from this type of garbage. https://t.co/NBTvx7nI9Q

"That was a play where Gronkowski should have been ejected from the game."@DeanBlandino weighs in on the late hit from the Patriots tight end. pic.twitter.com/6SQ2WEmYEm

After the game, Gronkowski apologized, but said the hit was about “frustration” for not getting calls:

#Patriots TE Rob Gronkowski explains why he was frustrated and gave the cheap shot."I just don't understand why there wasn't a flag. And there was a couple of times in the game. And they are calling it on me for the craziest stuff ever. It's like crazy. What am I supposed to do?" pic.twitter.com/IL4n9Fi96M

That apology shouldn’t excuse Gronkowski here. Plenty of players are frustrated every game, but don’t take that out on opponents after the whistle. And that’s not an explanation accepted by most. Even former Patriot Rodney Harrison had harsh words for Gronkowski on NBC’s Football Night In America, saying “If you do something like that to someone in the streets, you’re going to jail. He deserves to be suspended one game.” And New England head coach Bill Belichick apologized to Bills’ head coach Sean McDermott after the game:

Bill Belichick apologizes to Sean McDermott for the Gronk hit that gave Tre' White a concussion. Called it bull%^&*. pic.twitter.com/qfkBB9bgid

But this is something that could have a longer-term impact, both for White and for Gronkowski. And the “frustrated” explanation isn’t going to be enough to excuse it. Just being frustrated isn’t enough to justify an after-the-whistle cheap shot that endangered another player, and it’s not an excuse the NFL should accept when deciding how to punish Gronkowski.