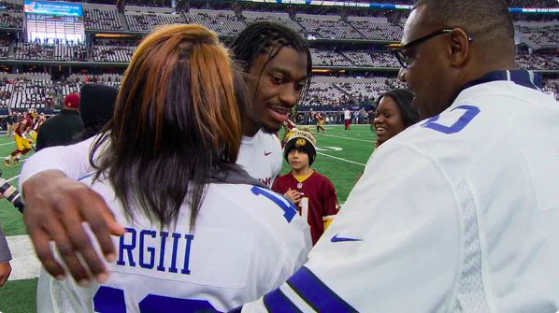 What does it say about the Dallas Cowboys that they’re now the most-desired destination for oft-maligned NFL quarterbacks in danger of letting their careers slip away?

It will be one of the more interesting dramas of this offseason, when Manziel and Griffin are expected to become available, Manziel via trade or release by a new Cleveland Browns regime, and RG3 via a salary dump by the Washington Redskins. That each is aiming for the Cowboys is not a sudden revelation. Sources close to each player have maintained since the beginning of last offseason that if either was cut loose from his franchise, there was a belief that Jones would be interested.

The odd thing about this rush to join the Cowboys is that Dallas already has quarterback Tony Romo under contract through 2019, so Manziel or Griffin would serve as a backup for the foreseeable future. It seems weird these guys wouldn’t want to go somewhere they could at least have a shot to start.

Still, Dallas is apparently seen as a haven for headcases and problem children. Jerry Jones has made it clear he’ll disregard all sorts of off-field issues to get a big-name player, from innocent malcontents like Dez Bryant to accused (later cleared) criminals like La’el Collins. If Jones will bring in and repeatedly-defend domestic abuser Greg Hardy, it figures he’d happily forgive Manziel’s partying and Griffin’s…whatever he did to cause his Washington tenure to crash and burn. Then again, Hardy has been a more productive player than Manziel or Griffin.

Whether RG3 ends up in Dallas or elsewhere, he clearly needs a change of scenery. The 2012 Offensive Rookie of the Year has been a healthy scratch all season after a prolonged falling-out with Washington coach Jay Gruden. With Griffin watching from the sideline, Kirk Cousins led the team to a 9-7 record and an NFC East title.

Some Cowboys fans who showed up on the field at Cowboy Stadium on Sunday are already prepared for RG3’s Dallas career. These people were reported to be the quarterback’s uncle and aunt, but Griffin denied a familial connection.

Griffin in locker room turned to reporters and said "Not my uncle. Not my family." in reference to the Cowboys fans wearing RGIII jerseys.

Now imagine if Griffin and Manziel both sign in Dallas and stage the highest-profile back-up quarterback battle of all-time. The Cowboys might as well sign Tim Tebow too, for maximum chaos.