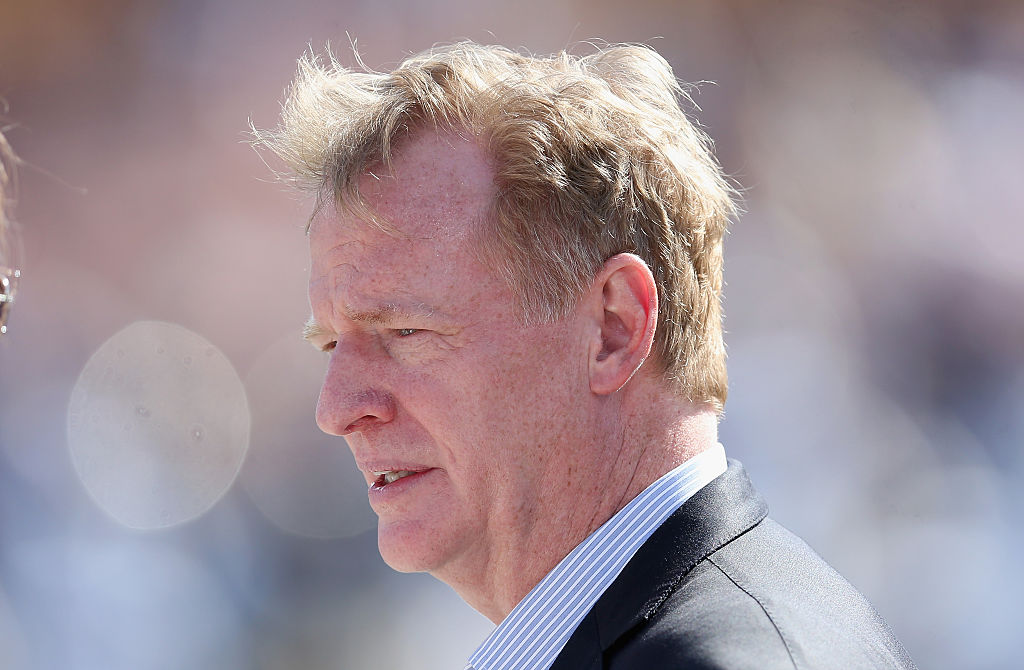 Roger Goodell is the Commissioner of the NFL. That means he is in charge of upholding his own rules that he’s set forth. Commissioner Goodell thinks he did a good job of that when it came to Josh Brown’s domestic violence case. Hint: he didn’t.

On Wednesday night, Commissioner Goodell made his first public statements since he went to London to watch the New York Giants (who employed Josh Brown) and Los Angeles Rams.

Giants President and CEO John Mara made controversial remarks about Brown last week, but recently admitted his team made “misguided decisions” when it came to Brown’s case. While Mara came clean and admitted they messed up, Goodell didn’t. Instead, he tried to save face.

When asked about Brown’s one-game suspension to start the season, Goodell defended that decision and said the league has “made tremendous progress” over the last two years.

“What you see here is a policy that’s evolved,” Goodell, said to Daily News’ Gary Myers during WFAN Radio’s “Chalk Talk” show. “We’ve learned a lot, but these are complex matters. When you talk to the domestic violence experts, these are difficult matters to deal with. You have rights, you have families that you have to be concerned with, privacy issues. Yes, you want to make sure you’re doing everything possible to address these (alleged incidents) when they happen, but you also want to deal with them to prevent them from happening… I think we’ve made tremendous progress. Can we make more and will we make more? Of course.”

But the thing is, Goodell royally screwed up Brown’s suspension.

Back in 2014, Goodell and the NFL implemented an automatic six-game suspension for first time offense of domestic violence and a lifetime ban for a second offense. So why was Brown given just one game?

Well technically Brown was arrested, but never charged, during his first offense in May of 2015. The investigation ended on September 14th, 2016, with once again, no charges filed.

Regardless of no charges being filed, Brown was still *arrested* for his role in a domestic violence incident. On top of that, the NFL’s new six-game suspension policy does apply to players accused of violence that are arrested. So in a sense, even though he was never charged, Brown being arrested was enough for the six-game suspension.

To make matters worse for Goodell, Mara admitted the Giants knew of the domestic violence allegations before signing him to a two-year, $4 million deal in April. In short, the Giants knew who Brown was and still paid him.

On Wednesday, Goodell tried to explain again why Brown deserved only one game and once again, fell on his face.

“Here’s the issue, the discipline that occurred on the one game was for the event on May of 2015,” Goodell said Wednesday night, alluding to Brown’s 2015 arrest in Washington. “That was the only one that we were able to get of all the different things that we’ve heard. The decision was made by our team after we had the evidence to be able to support the one game. We knew we would get challenged (by the NFL Players Association) and we were able to uphold it.”

The NFL’s team could’ve gotten a lot more information than they did. As Deadspin points out, the NFL always had access to documents that 100% warrant a six-game suspension. But then again, so does getting arrested and for some reason, Brown only got one game.

Only after new documents were revealed last week that showed Brown admitting to past abuse did the NFL finally lay down the hammer. The kicker was ultimately cut by the Giants this week.

“That’s what we’ll do now that we have additional information. We’ll aggressively pursue that and apply our personal conduct policy,” said Goodell.

Arrests are down since the new Personal Conduct Policy was put into affect and Josh Brown will probably never play in the NFL again. Those could probably be wins in Goodell’s playbook.

However, sadly for Goodell, he has too many losses everywhere else. Goodell tried to defend his Brown decision, but he couldn’t even do that well.