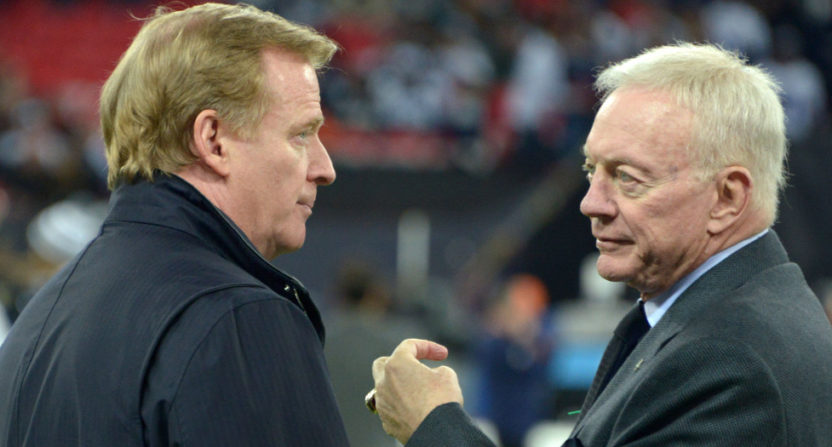 The long-running feud between NFL commissioner Roger Goodell and Dallas Cowboys owner Jerry Jones appears set to head to a new level. This fall, Jones publicly opposed negotiations to give Goodell a new contract, going to war with other NFL owners, trying to build support to replace Goodell with NBA commissioner Adam Silver (who declined), and even hiring Harvey Weinstein lawyer David Boies for a threatened lawsuit against the compensation committee determining Goodell’s new contract (which Jones eventually backed down on, but only after a few weeks of drama).

Jones also publicly blasted the league’s handling of discipline for Cowboys’ running back Ezekiel Elliott over domestic violence accusations, and may have played a role in Papa John’s then-CEO John Schnatter’s comments bashing the NFL and Goodell over their handling of players’ protests.

But Goodell signed a five-year extension in December despite Jones’ attempted interference, and now it looks like he’s going to unveil some punishment for Jones. Ken Belson of The New York Times reported Monday that Goodell is set to hand Jones a major fine.

Update: Ian Rapoport of the NFL Network indicates this isn’t a fine, but rather legal fee reimbursment, though:

Clarity on NFL and #Cowboys owner Jerry Jones: It’s not a fine, it’s a reimbursement of costs incurred by member clubs. More than $2M. The resolution has been on the books for more than 20 years. Goodell did this after consulting with owners.

With the support of many N.F.L. owners, Commissioner Roger Goodell is prepared to escalate his public feud with Jerry Jones, the owner of the Dallas Cowboys and long one of the most influential people in the league, by fining him millions of dollars for his efforts to derail negotiations to renew Goodell’s contract and for his outspoken defense of a star player who was suspended, according to five league officials with direct knowledge of the situation.

The punishment will be issued in the coming weeks by Goodell, who will declare that Jones’s actions were detrimental to the league, which rarely shows such acute signs of acrimony among owners and the commissioner’s office. Goodell has been reluctant to be seen as exacting retribution for the way Jones tried to sabotage his contract talks, but he was urged to bring the penalties by several owners who believed that Jones had crossed an unspoken boundary by threatening his colleagues.

What’s interesting here is that this is reportedly coming not strictly from Goodell, but from NFL owners upset at Jones’ behavior. And that’s not just about the Goodell contract talks and the threatened lawsuit against the league and its compensation committee, but is also about Jones’ reported attempts to influence those who decided on Elliott’s suspension. Beyond a straight fine, too, Jones is also expected to be “ordered to pay the legal fees that the committee incurred defending itself, as well as the legal expenses the N.F.L. spent defending its decision to suspend Elliott.”

A Jones-Goodell fight is one thing, and that’s been going on for over a year now. But it’s starting to sound more and more like Jones’ actions are riling up not just Goodell, but many of his fellow NFL owners. Belson adds that Jones was “upbraided for his behavior by many owners” at a NFL meeting in Texas in December, and it appears that it’s other owners behind the move to punish Jones financially here. And while Jones is unlikely to take any punishment lying down, it’s hard to see him finding too much success in his war against Goodell now that he doesn’t have the support of the majority of other owners.

Those owners seem to be much more behind Goodell than Jones, and that could push Jones more to the periphery of the league. A maverick owner can still have a significant impact on the NFL, of course (see Al Davis), but for much of Jones’ time as the Cowboys’ owner, he’s been a central league figure. This suggests that Goodell and the other owners may be trying to move him to the edges. But the news that this is just about legal costs rather than an additional fine does make it a little less of a blow to Jones.