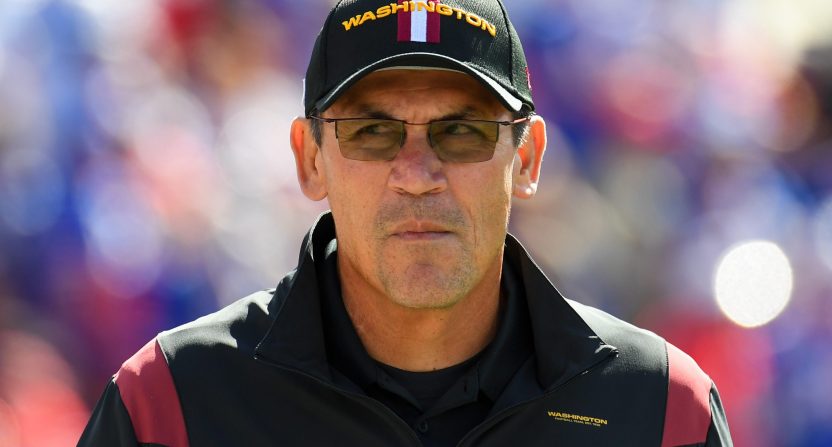 Given that he’s currently suing the NFL, it feels unlikely that former Miami Dolphins head coach Brian Flores will ever coach again. But at least one current NFL coach believes he should.

“This is a very accomplished coach,” said Rivera, per John Keim, ESPN. “I can see the frustration and I can feel the frustration. It’s almost as if this is your last resort. How does a guy like that get left out of the hiring cycle?

“If you put his résumé — and took the name off and changed the team he coached for and grew up with — and put it on the table and looked at all the résumés, Brian Flores is the type of résumé you point at. Let’s judge on merit.”

Rivera is generally well regarded in the NFL. So, his words will carry some weight. Whether that’s good enough to get Flores another job remains to be seen.

If anything, his comments don’t give Flores enough credit. If we look only at Flores’ record, 24-25, it’s easy to see why he’s is being passed over. Sure, plenty of losing coaches get a second opportunity as a head coach, but not always immediately after being fired from their first head coaching job.

When we add the team and context, Flores’ record is much better.

The Dolphins were in tank mode during the 2019 season, Flores’ first as head coach of the team. The tank was so obvious that Miami’s 5-11 record — normally nothing to write home about — wasn’t bad. Given that Flores is alleging that he was offered bonus money for every loss, it may not have been nearly bad enough for the Dolphins owner Stephen Ross.

From there, Miami got better, despite missing the playoffs in both 2020 and 2021. The Dolphins went 10-6 in 2020 and 9-8 in 2021. They’re the only team in NFL history to have a winning streak and losing streak of seven games or more during the same season. Given that the winning streak was second, that’s impressive. Plenty of teams would fold after losing seven straight games and starting 1-7.

We can’t dispute Rivera’s claim that Flores should be a coach based on merit. If anything can be disputed, Flores did a better job than Rivera is giving him credit for.