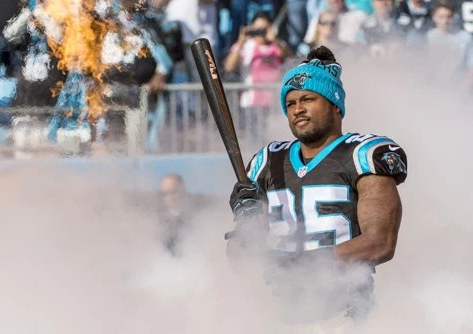 It has been an amazing year to be a baseball bat. From debates about monstrous bat flips to pregame hype on a football field, who ever would have thought we would spend so much time discussing baseball bats this year?

Carolina Panthers head coach Ron Rivera says his players will no longer carry a baseball bat onto the field before the game, just days after a bat became a focal point of ugliness between Panthers players and New York Giants wide receiver Odell Beckham Jr.

“[The NFL] is the ‘No Fun League’ for a reason,” Rivera said, according to ESPN. “If there’s something else out there that happened, tell us. We don’t tolerate that here.”

On Sunday, photos of cornerback Josh Norman and Marcus Ball carrying a baseball bat on the field prior to a game against the Giants surfaced, but only after the in-game altercations between Norman and Beckham escalated and led to postgame comments and accusations from Beckham and others suggesting there were slurs and threats hurled toward the second-year star receiver. Beckham has been suspended for one game by the NFL for his three unsportsmanlike penalties and charging at Norman with his helmet at the end of a play.

As far as Rivera is concerned now, he is moving on. And he should. Rivera’s Panthers are putting together a special season with an undefeated run with two games to play. Carolina is also lining up home-field advantage in the playoffs and could be the best team in the NFL. Now that he has handled this controversy, he can shift the focus on to a more important task for the team, which he seems suited to do. That doesn’t mean Twitter has to forget about the bat issue though…

Come on, Ron Rivera. If bats are outlawed, only outlaws will have bats.

Cooperstown officials confirm that Ron Rivera's retired baseball bat will be on exhibit in the spring.