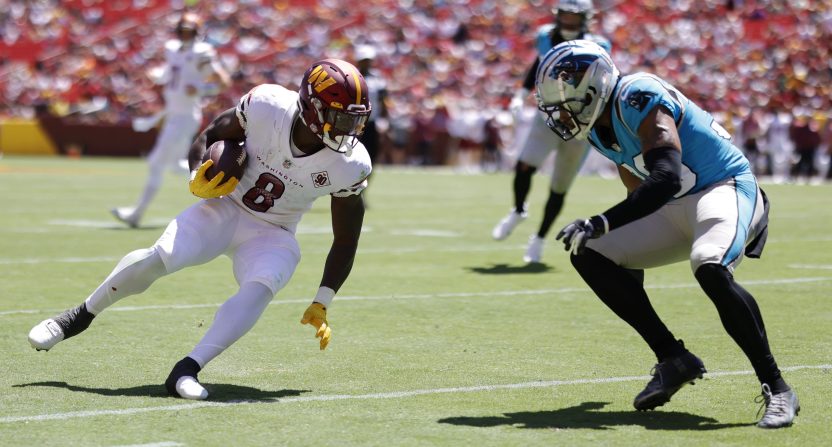 Some unfortunate news regarding former Alabama running back and current Washington Commanders rookie Brian Robinson emerged on Sunday, with reports that he was shot multiple times during an attempted armed robbery.

It was previously reported that the injuries that Robinson sustained in the altercation were non-life-threatening, and Commanders head coach Ron Rivera offered a positive update on how Robinson is doing moving forward.

“I can’t get into specifics of it other than to say he’s doing well. I had an opportunity to visit with him last night, which was really a relief and kind of cool because he was in a really good place,” Rivera said, via Ben Standig of The Athletic. “The doctors were very positive with him and he was very positive as well. He’s very fortunate, it’s a very unfortunate situation. He’s doing well, it’s just gonna be a matter of time before he’s back out here. There is no timeline, but, as I said, everything’s been very positive.”

Ron Rivera on Brian Robinson. Says he's "doing well." No timeline for his return. "It's just a matter of time before he's out here." pic.twitter.com/HKpun7GJz4

While there is currently no timetable for his return to the field from Rivera, this is certainly a positive statement about Robinson considering the dangerousness of an armed robbery and what could have happened.

The former Alabama standout appears to be pretty positive about the situation, all things considered, posting a picture on his Instagram story that indicates he is doing well following the shooting.

“Surgery went well! Thanks for the prayers! God is Great!,” Robinson captioned a picture posted to his Instagram story on Monday.

It’s a very unlucky thing to happen to Robinson considering he was reportedly ahead in the battle for the starting running back job for the Commanders this offseason.

Depending on how long he will be off the field due to this unfortunate altercation, he may be put on the back burner for the time being on the Commanders’ depth chart while he recovers from his wounds.