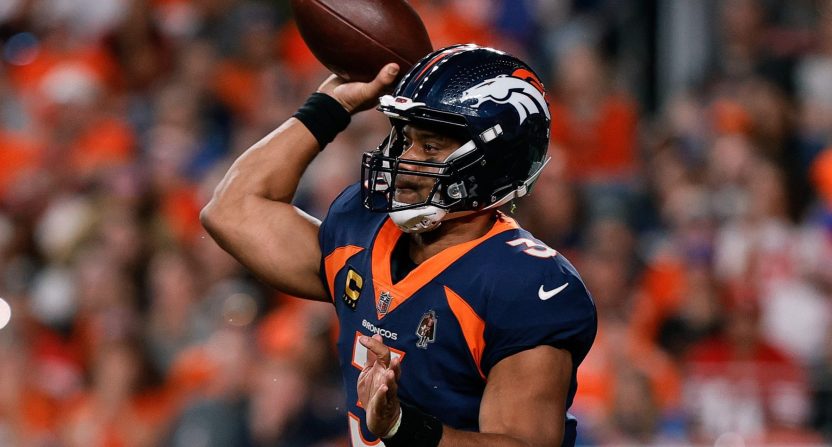 During Monday night’s game between the Dallas Cowboys and New York Giants, Eli Manning made a joke at the expense of Denver Broncos quarterback Russell Wilson, saying that the Denver Broncos should have paid $25 million to their punter, Corliss Waitman, instead of Wilson. On Wednesday, Wilson clapped back.

During a press conference on Wednesday, Wilson was asked about Manning’s comments from Monday night’s broadcast. And while it was clear from Wilson’s lighthearted response that he was mostly unbothered by Manning’s words, he also threw in a little jab at the former Giants’ quarterback – while calling him “Chad Powers,” in reference to a recent viral video.

After Eli Manning joked on Monday night’s ManningCast that the Broncos should’ve paid their punter $235 million instead of Russell Wilson, the Denver QB responded today: pic.twitter.com/aVHntOS3Js

For Manning’s part, he clarified his comments, saying that he meant no harm and was not intending to be critical.

“I don’t think we’re trying to be critical,” Manning said. “I think we always try to support the guys that are in the game. I think sometimes, ‘Hey, it’s live TV.’ I never try to take a real shot at somebody. I think that was obviously a very outrageous joke — because a punter had 10 punts. Nothing against Russell. He’s going to do great.”

Seems like it was just harmless fun all around.