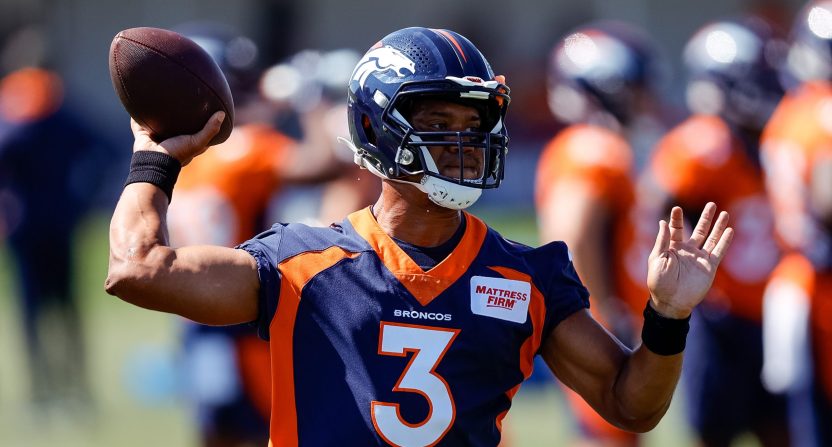 The Denver Broncos have locked up Russell Wilson for five more years. The team brought him in in March, sending two first-round picks, two second-round picks, and a fifth-round pick, plus Drew Lock, Noah Fant, and Shelby Harris, to the Seattle Seahawks for Wilson and a fourth-round pick. At that point, the 34-year-old Wilson was under contract for the 2022 and 2023 seasons. Now, following the Walton-Penner family’s official purchase of the team, the Broncos have handed out the largest contract in franchise history to Wilson, locking him up through the 2028 season:

Deal now ties Wilson to Denver for seven total years and $296 million. Another massive QB deal in the books. pic.twitter.com/uk6yelOL3j

Russell Wilson is a nine-time Pro-Bowl QB, a Super-Bowl champion, the winningest QB in his first 10 years in NFL history — and now the highest-paid Broncos player in history before he even takes a snap for the franchise.

NFL Network’s Ian Rapoport noted that the sides had been having quiet extension talks for five months, a timeframe that would have those starting shortly after Wilson (seen above at training camp in early August) was first acquired:

This was five months of negotiations that started around the time of the league meeting, all quiet. Now, a deal. https://t.co/NfUjbYdzqq

ESPN’s Field Yates had a useful chart of how Wilson’s average annual value under this deal will compare to other top-paid QBs:

Of course, Rodgers‘ contract (which makes him the highest-paid player in NFL history in per-year money) is a little different, as his new deal only covers three new years (at around $150 million, with around $100 million fully guaranteed). Wilson’s new deal is for more years and more total money, and it comes in ahead of the raw values for Watson (five years, $230 million, fully guaranteed) and Murray (five years, $230.5 million, $160 million guaranteed). It’s behind Mahomes‘ contract’s raw value, but that’s a longer contract (10 years, $400 million, $140 million guaranteed, signed in 2020 before the last wave of extensions). So Wilson’s contract has more guaranteed than anyone but Watson, and more average annual value than anyone but Rodgers.

Wilson has earned nine Pro Bowl nods over his career so far, and he led the NFL in passer rating in 2015 and in passing touchdowns in 2017. He also led the Seahawks to a Super Bowl victory over the Broncos in Super Bowl XLVIII back in February 2014. Last year, he threw for 3,113 yards and 25 touchdowns against six interceptions in 14 games, while also rushing 43 times for 183 yards and two touchdowns. However, his completion percentage and passing yards per game were both down from the year before (64.8 percent versus 68.8 percent and 222.4 yards versus 263.3).

This contract indicates that the Broncos sure seem to believe that Wilson can be a dominant quarterback for them, both this year and well beyond (he’ll turn 40 in November 2028, the final year on this deal). We’ll see how that bet works out for them.