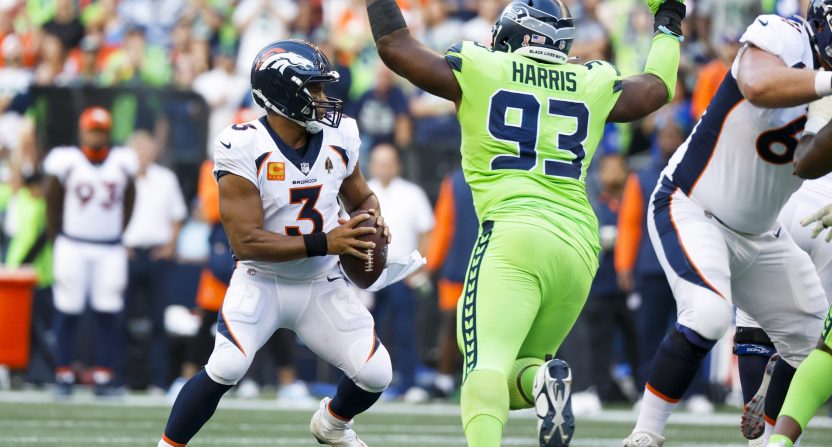 Monday night was the Denver Broncos debut for Russell Wilson, and it was his return to Seattle to face a Seahawks franchise he starred for over 10 NFL seasons. The Broncos entered the game as six-point favorites, but his former team pulled off an upset, with some help from bizarre clock management and decision-making for first-year Denver head coach Nathaniel Hackett, to go with two brutal Broncos fumbles.

Seattle held off Denver 17-16 in Wilson’s return (and Seahawks fans did not welcome him back), with Broncos kicker Brandon McManus missing a 64-yard field goal attempt in the final seconds.

The Broncos had very questionable clock management on the drive, and then made a very questionable decision to attempt a 64-yard field goal instead of just trying to convert a 4th-and-5 in a Wilson-quarterbacked offense (and when he surely really, really wanted to do everything to get this victory vs a team that traded him away).

Denver also fumbled twice inside the one-yard line, with Javonte Williams and Melvin Gordon each coughing the ball up.

The Seahawks stuff Melvin Gordon and the Broncos on 4th-and-goal at the 1! 🏈 #MNF pic.twitter.com/1d4BpNf5fB

The Broncos' offense inside the 1-yard line has been a complete disaster. 🏈 #MNF pic.twitter.com/69cNtRdc19

While the Denver defense held Seattle scoreless in the second half, quarterback Geno Smith and the Seahawks moved the ball with ease in the first half. The Broncos especially had trouble covering Seattle’s tight ends, with Will Dissly and Colby Parkinson each scoring touchdowns.

Geno Smith to Will Dissly for the Seahawks touchdown! 🏈 #MNF pic.twitter.com/xU2YUv0f1h

Seahawks' tight ends are torching the Broncos' defense in the first half. #MNF 🏈 pic.twitter.com/osUYpg8p94

Smith — who beat out Drew Lock in a training camp battle — was very efficient, completing 23-of-28 passes for 195 yards, two touchdowns, no intercpetions, and a 119.5 passer rating.

Denver entered the season with Super Bowl title hopes, while the Seahawks are in rebuild mode and were expected to be one of the NFL’s worst teams.

But through Week 1 in the unpredictable NFL, it’s the Seahawks that are 1-0 and the Broncos get a bad loss while playing in a loaded AFC West division that will allow very little room for error.

Here’s a look at how the NFL world is reacting to the Seahawks knocking off the Broncos in Wilson’s return to Seattle:

We live for the chaos. pic.twitter.com/7UaBk2F63Z

The Seahawks did it. They beat Russell Wilson in his return.

Pete Carroll looking at Russell Wilson after the Seahawks beat the Broncos pic.twitter.com/NamwZfzrER

.@Seahawks are the class of the NFC West pic.twitter.com/IQbZfogkk4

SEAHAWKS BEAT RUSSELL WILSON IN HIS RETURN TO SEATTLE pic.twitter.com/zv6uOnb4MB

The Broncos just gave him 161M guaranteed and didn’t trust him to pick up 5 yards….