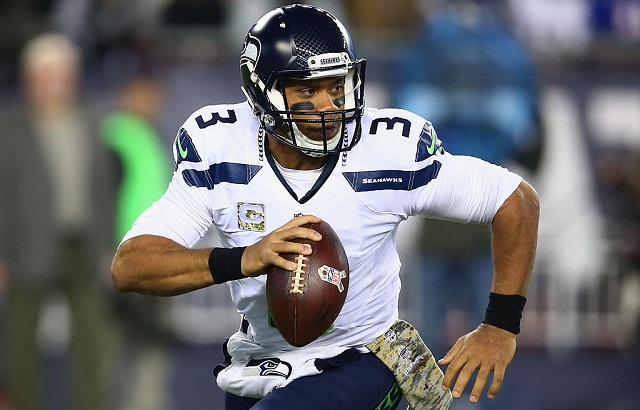 Before the Seattle Seahawks’ Week 10 Sunday Night Football trip to Foxboro, the last pass Russell Wilson threw against the New England Patriots was an interception to Malcolm Butler that ended Seattle’s chances of back-to-back Super Bowl wins. Wilson and the Seahawks had an opportunity to avenge that heartbreak in Super Bowl XLIX at least slightly when they traveled to face Tom Brady and the Pats in a rematch that was almost two years in the making.

Given a chance to prove himself against the team which prevented him from a second consecutive championship, Wilson rose to the occasion Sunday night in one of the best games of his career. A season-high in passing yards and three touchdowns from Wilson lifted the Seahawks to a 31-24 win in a potential preview of an even bigger Super Bowl rematch this February.

Still limited outside of the pocket due to an ankle injury, Wilson beat the Patriots with his arm in a game that NFL fans have not witnessed for some time now. The performance was particularly impressive against a Patriots defense expected to once again challenge Wilson with Bill Belichick game-planning for a slowed-down version of the Seahawks passer.

Instead, Wilson gave what could be the best game of his career to date. Limited to the pocket, Wilson found the holes in the Patriots’ pass coverage all night and looked like the better pocket passer compared to Tom Brady with 25-of-37 passing for 348 yards and three touchdowns. That precision from Wilson allowed the Seahawks to win a game against the Patriots on the road that both solidifies their hold in the NFC West and boosts their chances of a first-round bye in the playoffs.

More importantly than the big win in the standings for the Seahawks is the continued development of their offense from one anchored around retired running back Marshawn Lynch and the offensive line into an attack led by their franchise quarterback. Wilson put his stamp on the offense against the Patriots’ secondary with accurate and well-time passes to tight end Jimmy Graham and a talented group of wideouts led by Doug Baldwin.

After a concerning period of three games without a touchdown pass while battling injuries, Wilson has now bounced back to rattle off consecutive games with dominant performances for the Seahawks in primetime wins. Sunday might’s masterclass against the Patriots, coupled with the equally magnificent 20-of-26 passing performance in Week 9 on Monday Night Football against the Buffalo Bills, has Wilson at the top of his game and is resulting in another year of Super Bowl talk in the Pacific Northwest.

With Wilson now playing out of his mind to get the Seahawks offense to a higher level, the NFC appears to be a two-horse race between the old guard in Seattle and the Dallas Cowboys’ young guns in the rookie duo of Dak Prescott and Ezekiel Elliott. Exciting early starts from the Minnesota Vikings and the Atlanta Falcons have faded fast, and the cream has quickly risen to the top in the NFC. All signs point to a potential dream matchup of two dominant regular season teams in the NFC title game.

If Wilson continues his exciting trend of incredibly accurate passing, the Seahawks are clear favorites over the Cowboys and any other NFC team on paper come the playoffs. Given the experience of the team and coaching staff, it will be hard to argue against a Seahawks team that once again has forced themselves into the Super Bowl picture as the calendar moves closer to Thanksgiving and the final stretch of the regular season.

It may feel familiar to see the Seahawks as Super Bowl favorites, but this time the new wrinkle is Wilson’s arm leading the way to success. For Wilson to win his second Super Bowl, this trend will have to continue for the rest of the season. The Seahawks are far more dangerous team when they get this level of play from their quarterback.