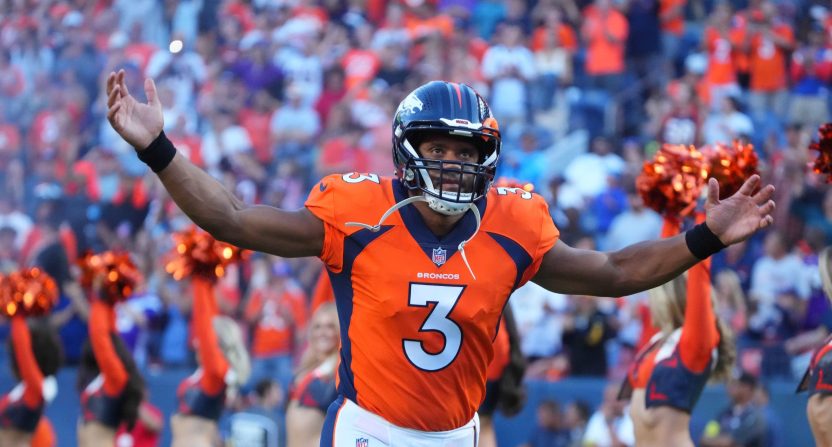 The Denver Broncos are all-in on Russell Wilson, even if some folks in the Seattle Seahawks front office seem to think his best days are behind him.

Wednesday, ESPN reported on the drama that led Wilson to be traded from Seattle and included a quote from an anonymous source in the Seahawks’ front office, saying that they viewed the quarterback as a “descending player.”

“Is he going to be able to be a true pocket passer at the end of his career and just stand there and drop the ball off to his check-downs?” asked the anonymous front office person. “He’s never done that. I can’t tell you he’s going to be able to do that.”

Wilson is currently preparing to return to Seattle for the 2022 NFL season opener, though for the first time since he was drafted in 2012, he’ll be on the opposing team. When asked about what kind of reception he expects, the Super Bowl-winning QB said that regardless of how it goes he’ll always have a place in his heart for the city and its fans.

“Those 10 years, I couldn’t imagine those not being in my life and how special they were, and how many games we won, the amazing thrillers, the Super Bowl we won. I’m going to think about all that and the joy and gratitude from that. And also, we’ve got a football game to play.”

As far as what the Seattle front office member said about him, Wilson says everyone has the right to their opinions but he knows what he’s capable of.

“People have their opinions and thoughts and ideas, and everybody has their own right to think what they want to think,” Wilson said. “I know how the whole thing went, how the situation transpired. But at the same time, every second of it I enjoyed in terms of being there and trying to give it my all every day.”

Russ is going to let his play do the talking for him, and we’ll see if the Seahawks come to regret the trade, at least for one weekend.