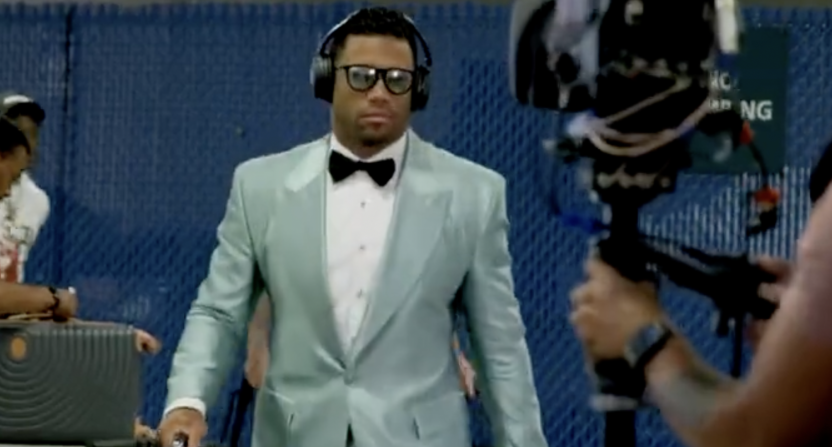 On Monday night, Russell Wilson returns to Seattle to face his former team and he decided to arrive in style.

In his first game with the Denver Broncos since being traded from the Seahawks, Russ showed up at Lumen Field wearing a very shiny lime green suit that was pretty impossible to miss. He even tweeted out video of his arrival himself just in case you missed it.

Naturally, if you’re going to show up looking like that for a big Monday Night Football game, people around the NFL world are going to have opinions about it. Many of whom assumed this meant Wilson was on his way to the prom.

Who wore it better? pic.twitter.com/bnnLqkeFYR

Lol is he going to prom https://t.co/uAmOIuu08t

Ummm Sir, the Oscars are in March https://t.co/3JujolWD4e

Russ about to announce the baby of the year https://t.co/guOcAfaXba

Russell Wilson dressed like he's going to prom in 2002 https://t.co/OmZfBlkwdz

*was @TeddyRicketson’s observation after I said it looked like Russ was dressed for prom. His jokes are usually better than mine. pic.twitter.com/avK2AI6zSD

It’s going to be an interesting night for Wilson as its not only his first game since being traded but it’s coming against the Seahawks in Seattle. The NFL schedulers know exactly what they’re doing.

To be fair to Russ, if you don’t like the suit, it appears that he’s simply trying to stay on brand with the rest of the league’s top passers. To wit, here’s what Patrick Mahomes wore before the Kansas City Chiefs season-opener.

Laugh all you like but apparently we’re all gonna be wearing lime green suits this season.