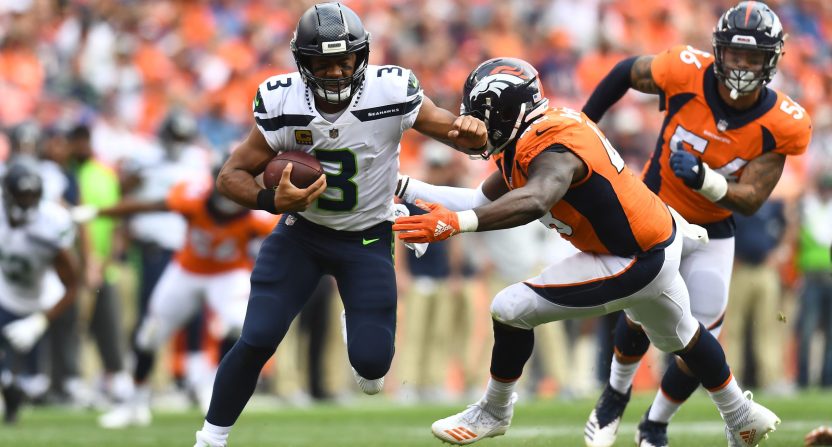 When Aaron Rodgers decided to return to the Green Bay Packers, he was essentially spurning the opportunity to get a fresh start with the Denver Broncos, who had highly coveted him. While many in the Broncos world were upset by the news, little did they know that the NFL franchise had a Plan B called Russell Wilson.

In a true blockbuster trade, the Seattle Seahawks have traded quarterback Russell Wilson to Denver, according to ESPN’s Adam Schefter.

Blockbuster: After weeks of negotiations, in one of the largest trades in NFL history, the Seattle Seahawks and Denver Broncos have agreed to terms for a deal involving Super-Bowl winning QB Russell Wilson, sources tell ESPN.

Trade is pending a physical and Wilson’s approval. pic.twitter.com/oRFDV8Ehyx

“After weeks of negotiations, in one of the largest trades in NFL history, the Seattle Seahawks and Denver Broncos have agreed to terms for a deal involving Super Bowl-winning QB Russell Wilson, sources tell ESPN,” wrote Schefter. “Trade is pending a physical and Wilson’s approval.”

Schefter reported that this deal has been in the works for “at least two weeks” and is not related to Aaron Rodgers’ decision, though the timing of everything does seem a bit suspect.

Denver acquiring Russell Wilson has nothing to do with the Aaron Rodgers' decision to return to Green Bay. Denver general manager George Paton initiated trade talks with Seattle for Wilson at least two weeks ago, per sources.

Wilson, who has a no-trade clause in his contract, has been playing footsy with the Seahawks all year long about whether or not he wanted to remain with the franchise. While both sides have tried to publicly say they want to continue working together, it was clear that there was a rift that just wasn’t going to heal. The Washington Commanders made a play to get Wilson recently but the Seahawks said no. But apparently, the Broncos made them an offer they could not refuse.

It’s a true end of an era for Wilson and the Seahawks. Once considered a risky and wasted draft pick by some, Wilson quickly rose the ranks of starting quarterback and eventually led the franchise to two Super Bowls, winning Super Bowl XLVIII. The nine-time Pro Bowler became synonymous with the Seahawks and was the face of the franchise for a decade.

For the Broncos, their goal of following in the Los Angeles Rams’ footsteps and bringing in a veteran quarterback to compete right away has been achieved. Even at 33-year-old and coming off a season with some injuries, Wilson is leagues ahead of where the franchise has been at the position and he immediately elevates them to a contender in the tough AFC West. Not to mention, if there’s any franchise who knows the benefit of bringing in a veteran QB to win now, it’s the Broncos.

Drew Lock is a part of the trade to the Seahawks, per sources.

While we don’t know the full details, we do know that Drew Lock is headed to Seattle where he’ll compete for the starting position, though it seems unlikely he’s in the future plans for Pete Carroll.

As you can imagine, there were some seriously strong reactions to the news that the Russell Wilson Era is over in Seattle and has begun anew in Denver.

A year ago, the GM was ready to move on from Russell Wilson. The head coach was not. Seattle runs it bad, wins seven games… everyone agrees it’s time.

Russell Wilson will play at Lumen Field this year… Just not as a Seahawk. Let that sink in.

Russell Wilson is the most impactful, notable star in the history of Seattle sports. Period.

He was traded in a couple hours after the #Broncos didn't have a shot at Rodgers.

What a load of horse manure from the #Seahawks front office to their fans and players.

nobody in seattle is getting any work done today https://t.co/uLGXb9mi8i

Denver now proud employers of the weirdest QB in the league pic.twitter.com/Szr2NehwLU

So, anything going on today in #Seattle sports?

We’ll have to wait and see what else is part of the deal, which will likely include draft picks as well, and how things shake out for both franchises.

UPDATE: Looks like we have some clarity on the rest of the deal.