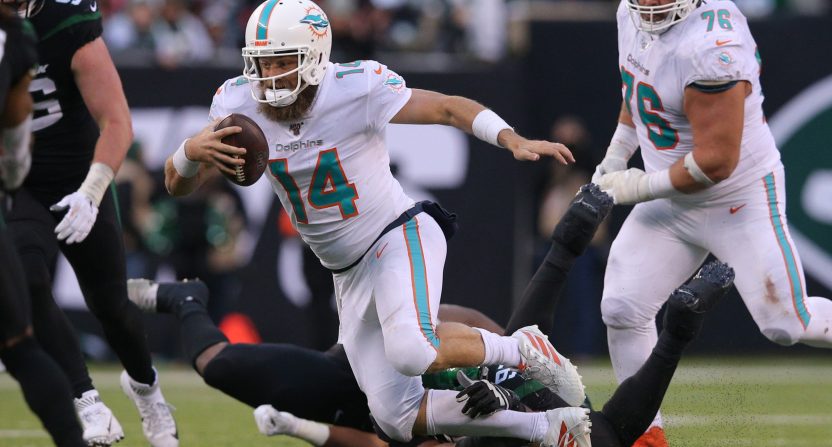 Ryan Fitzpatrick might not go down in history as being the greatest quarterback ever but the 37-year-old from Harvard has certainly developed a skill that allows him to remain in the NFL. Fitzpatrick may have never had a 4,000 yard passing season but he has been on eight teams in 15 years so he’s definitely had a full career.

Fitzpatrick also isn’t known to be an outstanding runner either but for multiple reasons, he’s in line to lead the team in a rather interesting category. Pro Football Talk’s Mike Florio noticed that Fitzpatrick has a realistic chance to lead the Miami Dolphins in rushing even though he has 186 rushing yards in 2019.

How Fitzpatrick is in a position to lead his team in a pretty important stat with so few yards is something. One, the Dolphins are 3-10 and when you’re playing from behind all the time, chances are you aren’t able to run as often. Two, the Dolphins has had four different running backs starting at least one game this season. Kalen Ballage (currently on IR), Kenyan Drake (now with the Cardinals), and Patrick Laird have a combined 393 rushing yards while Mark Walton is leading the teamwith 201 yards but has since been suspended and arrested due to violating the conduct and substance abuse policy as well as being arrested for aggravated battery on a pregnant woman. Fitzpatrick is just 15 yards behind Walton and with only Laird, who currently has 84 rushing yards, able to catch him, Fitzpatrick has a good chance to get the honor at the end of the season.

Lamar Jackson of the Baltimore Ravens also leads his team in rushing but Jackson has over 1,100 rushing yards, broke the QB single season rushing record in just 14 games, and is leading his team in rushing yards because of his because of talent and being able to outrun everyone on the field. It takes a special player having a special season to lead his team with the bare minimum and that’s what Ryan Fitzpatrick is doing.