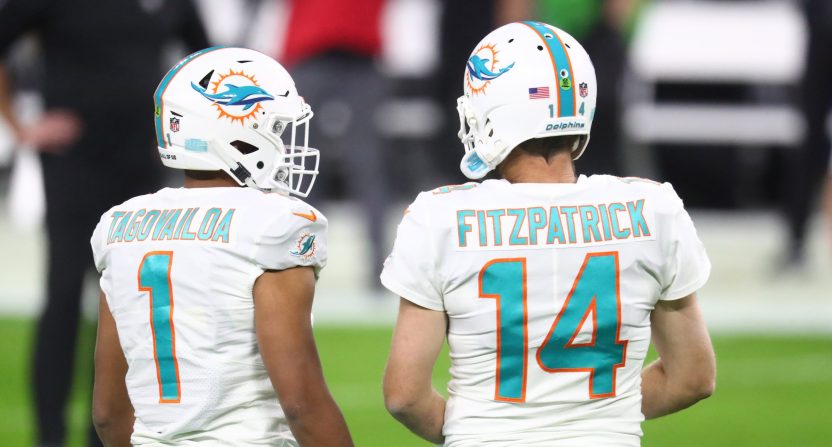 Ryan Fitzpatrick is part of Amazon’s Thursday Night Football studio crew this NFL season but it wasn’t too long ago that he was a quarterback for the Miami Dolphins. One of the seasons he was with the franchise, current starter Tua Tagovailoa was there as well.

While Tagovailoa is seeing a lot of success right now with the 3-0 Dolphins, he gained a reputation for struggling to keep up with the NFL game in his early years. Fitzpatrick shared an anecdote on Thursday that fit with that reputation.

While Tua was the starting quarterback for most of the 2020 season, former head coach Brian Flores would sometimes sub him out for Fitzpatrick in the four quarter, especially if the game was close. Now, Fitzpatrick says that Flores should have let his young QB gain that experience rather than replacing him when the game was on the line.

“There was the Denver game that I came in in the fourth quarter, and there was the Las Vegas game and I came in the fourth quarter,” Fitzpatrick told Joe Schad of the Palm Beach Post. “I think that was that was kind of an admission by coach for us that there were certain aspects of (Tua’s) game that weren’t ready yet, because he was young in terms of the two-minute drill and being able to do some of that stuff efficiently.

“But he’s so talented, that it was time to get him on the field and get them to learn. And so I thought (Tua) did a great job with that year, because that wasn’t easy. showing up to work every day having a smile on his face. And so, after I left, there was some things that got even rockier with that relationship.”

At the time, Flores told reporters that benching Tagovailoa at key moments wasn’t a reflection of his lack of faith in the young quarterback, but it’s hard to believe that. Regardless, it looks like the hardships that Tua has had to work through are paying off for him and the Dolphins right now.