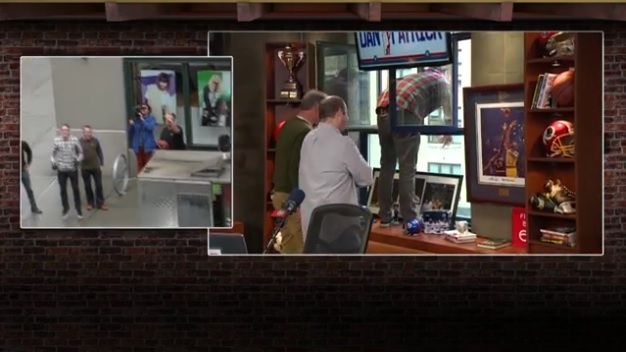 When Ryan Leaf was drafted with the second overall pick in the 1998 NFL Draft out of Washington State, the quarterback looked like a future star. Well, Leaf never did reach his ceiling and only played in the NFL for four seasons. Despite the short career that ended 15 years ago, Leaf can still rip it.

The Dan Patrick Show does a terrific job of bringing in athletes and celebrities to do crazy stunts or make scorching hot takes (such as Larry David claiming he could be the Jets’ offensive coordinator). That trend continued on Wednesday when Leaf appeared on the show.

The title of that video is almost as ridiculous as the video itself.

While we’re not sure how high that is for that specific building, some quick research on the good ‘ol google machine tells us that a three story office building is usually around 38 feet high. To throw a football that high over traffic in New York City is not easy. But then again, Leaf does mention in the video he was aiming for the fifth story because he knew the arc of the ball would bring it down to the third. As a result, it’s unfortunate Leaf wasn’t throwing the ball straight up because it probably could’ve gone much higher.

The challenge of throwing the ball across an avenue in New York City through a window three stories high wasn’t the only interesting thing about the video and Leaf’s entire segment either. The former quarterback provided listeners with some interesting nuggets about his career such as…

“Ray Lewis used to bark at me so I don’t know if that… a bunch of crazed dogs as Lawrence Taylor used to say,” Leaf joked.

“Ray Lewis would bark at you?” Patrick asked.

When Lewis was in his prime, he was one of if not the scariest defensive player on the field every week. His entrance onto the field before the game would electrify the crowd and when he sacked an opposing quarterback, the Ravens fans would go nuts. The fact that Lewis would also bark at people just adds to the myth of Lewis’ incredible career.

“Sometimes I would look at guys across the line from me going ‘why do I have to be more so much more focused than they do?’ This sucks I want to play defense,” Leaf admitted.

Of course this quote was in response to a bunch of fake barking noises Patrick’s crew was making after the Ray Lewis comment.

While Leaf did look great as a quarterback, he did occasionally go hard after defensive players who would pick him off. So in a sense, Leaf was on defense, albeit temporarily, 36 times in 25 career games.

On a similar but separate note, Leaf isn’t the first quarterback to participate in a ridiculous challenge to show off his arm strength and accuracy.

Back in July of 2015 during training camp, the New Orleans Saints quarterbacks showed off their accuracy.

Aaron Rodgers and Chris Paul once participated together in a Dude Perfect challenge.

Russell Wilson once messed around with Dude Perfect too.