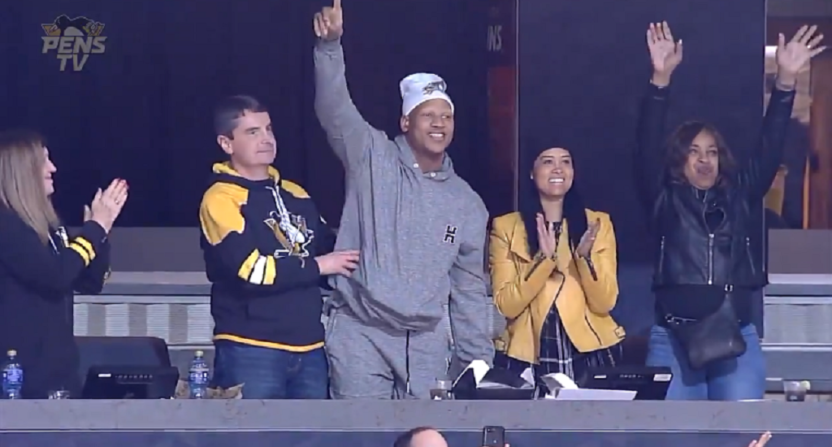 Pittsburgh Steelers linebacker Ryan Shazier suffered a brutal spinal injury against the Cincinnati Bengals on Dec. 4 and was rushed to the hospital. A month later, Shazier’s dad said his son had feeling in his legs, and last week, the linebacker was finally discharged from the hospital.

On Tuesday night, Shazier attended the Pittsburgh Penguins’ home game against the Vegas Golden Knights, and received a standing ovation. The crowd especially went wild when Shazier stood up himself to show his appreciation for their support.

A well-deserved STANDING ovation for this guy.

Ryan Shazier in the house … and standing: pic.twitter.com/3jgk1X4rgc

Ryan Shazier is here and, during standing ovation, stands up and waves to crowd. What a moment.

It was a major moment in Shazier’s recovery and the first video visual sign of standing we’ve seen from the linebacker. This wasn’t the only good news that came out for Shazier this week either.

Over the past week, reports had emerged that Shazier was walking on his own and doing extremely well. While many hoped that was true, it wasn’t 100% truthful.

That ultimately led to NBC’s Michele Tafoya having to report the truth on Super Bowl Sunday. While it wasn’t the best news one could hope for, it was great news in the grand scheme of things when looking back on the injury.

Shazier went on to confirm Tafoya’s reporting on his own feed.

Regardless, standing is standing and any form of walking, whether it’s assisted or not, is great news after that rough hit.

Here’s to many more reports of good news and more public displays of appreciation for the linebacker in the future.

I’ve had a lot of 1st downs at UPMC, but you know being the defensive guy I am, my mind is on 3 and out. With that being said, I want everyone to know that I’m moving on to the next step of the process. Today’s a big day for me as I’m officially being released from the hospital. I want to take a moment to thank the people who have helped me the past two months. First and foremost, I want to thank God because at the end of the day I don’t think I’d be making progress without His vision and hands protecting me and my family. I will continue to trust in Him and thank Him, because it all starts with Him. To my family: you’ve been my rock. Words can’t express how thankful I am for you Michelle, RJ, Mom, Dad, and VJ for always being there for me. You’re my everything. To Jerome: my trainer and best friend. Thank you for being there from day 1 and every day after continuing to push me to be better every day. I’d like to thank Dr. Okonkwo, Dr. Harrington, Dr. Maroon, and Dr. Schroeder for their amazing work on my procedure and continuous care. I can’t appropriately express how grateful I am for how quickly you’ve helped me bounce back. I want to thank the medical staff at UPMC for their amazing care, support and therapy they have given me- especially Joe, Nikki, Karolina and Dani. I know the staff will continue to help me find a way to keep on pushing as we continue therapy. The support from my teammates has been truly amazing. From former players to current players and their families- they have helped me and my family day to day with visits and gifts. We can’t thank you enough. I want to thank Mr. Rooney, Coach T, Mr. Colbert, and the entire Steelers organization for the unwavering support they’ve given me. I knew they were an amazing organization, but more than ever they’re family to me. Lastly, I want to thank Jimmy, Candice, and the CAA Sports staff for being here when I need them most. I don’t know if I’d be where I’m at or making the progress I’m making without you guys. I want everyone to know that all of the support and prayers are absolutely being answered. I will continue to work hard and push and find a way back. #Shalieve #Steelers #prayfor50