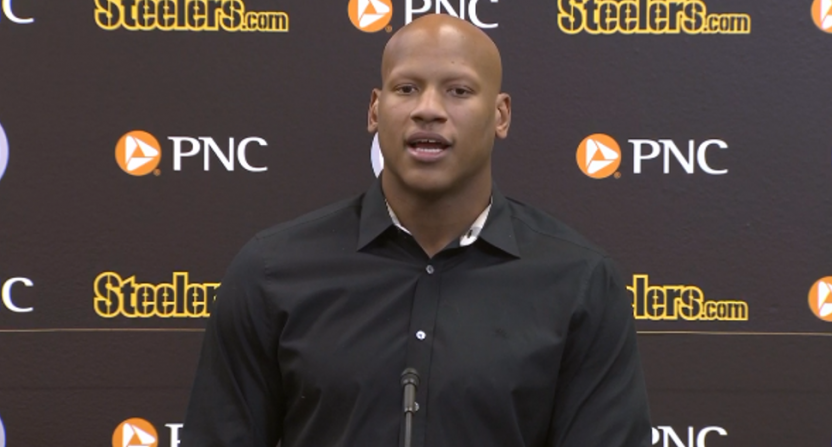 Pittsburgh Steelers linebacker Ryan Shazier suffered an awful spinal injury in Week 13 of the 2017 NFL regular season, but has been making impressive progress in his recovery. He even stood during an appearance at a Penguins’ game in February and walked out on stage to announce the Steelers’ first-round pick at the NFL draft in April. But Shazier’s goal is even higher; he said at a press conference Wednesday that he hopes to get back to playing football, as per Herbie Teope of NFL.com:

“My dream is to come back and play football again,” Shazier told reporters. “I’ve been working my tail off every single day, so I have that in the back of my mind every single time I go to rehab. I just try to stay positive every day, so I’m just trying to do everything I can to get back.”

…Shazier continues to utilize a cane to get around, but he hopes to soon reach the next step of recovery where he won’t need assistance.

“One of the things I’m looking forward to doing is I just want to be able to start walking a little bit more by myself without using a cane,” he said. “And if that’s camp, I’m happy for it. If it’s the regular season, I’ll be happy for it.”

There’s obviously a huge level between getting around, with or without a cane, and playing professional football, but maybe Shazier shouldn’t be counted out. His recovery to date has been ahead of many expected timetables, and he is only 25. He’s also been an incredible NFL player, making two Pro Bowls in four seasons with the Steelers. So if he is able to return to fitness, he may well get another chance. And these aren’t the first comments he’s made along those lines; he told Roosevelt Nix in February how determined he was to play again.

“I’ve gotta get back, bro. Every day, bro. Every day I’m like — right now, I’m reading a book and it’s basically saying trust the process, bro. I’m really trusting the process and I know the end goal. I’m taking it every step of the way but I’m like, I’m giving it like my football effort, like 1,000, everything I’ve got.

“The therapists, they’ll be like ‘Man, this is crazy. I’m happy to be working with an athlete because I’ve never seen somebody work this hard.’ They see progression almost every day. They say some progression they see week to week, they see from me day to day. I’ve got to get it. I’m really trying to come back and still be a Pro Bowler, still be an All-Pro.”

It’s remarkable that Shazier is so committed to returning to football after this kind of injury, but it certainly wouldn’t seem smart to bet against him. The odds may be long, but he’s already overcome plenty of odds. And while this is an ambitious and challenging dream, it’s not necessarily an unachievable one. We’ll see how this goes for Shazier from here, but his battle back to recovery has already inspired many, and he’s also embracing his current role as a mentor to other Steelers’ players. If he is able to make his way back to playing in the NFL the way he hopes, that will make his story even more incredible, but he has already accomplished a lot. We’ll see what’s next for him.